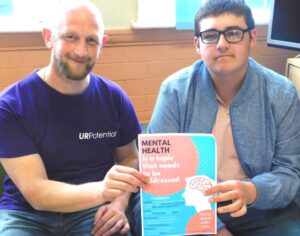 YOUNG people in Wyre have come together to raise awareness of mental health in the area’s schools.

Chris Smith from youth group URPotential has worked with young people in an effort to improve mental health care and support for pupils in Wyre schools.

He explained: “URPotential work with many projects across Wyre, Blackpool and Fylde including youth volunteering.

“This project, in partnership with Wyre Council, included a consultation with more than 2,000 pupils from Wyre secondary schools. Young people identified in priority the issues they currently face and made suggestions of how things could be improved.

“The young people identified many concerns with the top three being mental health, bullying and smoking.

“A group was formed to look into the issues and it decided to focus on mental health with the youngsters putting their ideas into action on how to raise awareness of mental health.”

They decided the posters should be placed behind cubicle doors in all the toilets in Wyre secondary schools.

This allows young people who may not feel comfortable talking about mental health to have access to mental health support contacts across the Fylde coast. such as the CASHER number from Blackpool Teaching Hospitals which supports young people and advises them where to attend to gain further support.

Simon Crabtree, 14, from Fleetwood High school, is one of the young people involved in the project,

He said: “I think this is a useful tool for someone who doesn’t always want to be seen struggling and who is being peer pressured.

“People don’t talk about mental health as much as they should and if just one person uses the contacts then we have done our job.

“I feel like I am an advocate for mental health and I have learnt how I can combat problems.

“I have really enjoyed being part of this group and have gained a lot of confidence in the process.”

Chris Smith added: “The feedback we have received from schools has been fantastic. They are all on board and supporting young people with their mental health.

“I am so proud of all members of our group who have worked so hard to make a difference.”