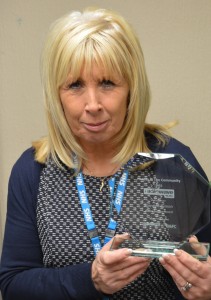 End of Life Educator, Lorraine Tymon, was honoured with a special hero award after going the extra mile to help a woman whose dad was dying.

Lorraine was nominated for a Radio Wave Hero in the Community Award after she helped Lisa Donoghue, whose beloved dad was dying.

Lisa and Lorraine had known each other more than 20 years ago, but had lost touch. By chance, they were reunited at Blackpool Victoria Hospital when Lisa’s dad John, who had Alzheimer’s Disease, was gravely ill.

Lisa explained: “When I was in hospital with my dad on November 17 last year, my dad’s doctor brought two lovely ladies to see me from the End of Life team. I think it was to tell me to go home, which I wasn’t going to do!

“By a twist of fate, one of those ladies was Lorraine, she had happened to bump into my dad’s doctor who brought her into dad’s room to help.

“I said ‘I know you’ and from that moment on Lorraine was there for me. She checked in on us throughout the day, made dad comfortable and gave me her number when she finished work. People say let’s keep in touch, let’s go for that coffee, and half the time they don’t mean it, but Lorraine meant it when she said ‘ring me if you need me’. Later that night I did!

“I texted Lorraine and she was there in my dad’s room in about 10 minutes.

“When my dad passed away in my arms 10 minutes later, Lorraine was holding his hand.

“Lorraine knew what to say, what not to say and supported me in an amazing way.

“Lorraine won a deserved award and I am so proud of her. She helped me and dad; she didn’t need to but she did. She meant it when she said ‘if you need me I’m here’.