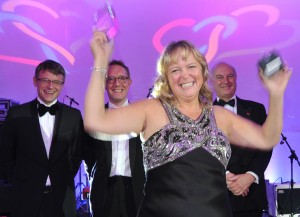 Sister Andrea Lewis was the first person to win a new award at the 2015 Celebrating Success Awards evening.

The Golden Heart Award, sponsored by Weightmans Solicitors, was for staff whose actions changed or saved a life and who went above and beyond their role, acting with kindness and compassion.

The winner in this category was Andrea, a Sister in the Emergency Department (A&E), who was nominated by a woman whose husband had a cardiac arrest at a car boot sale eight years ago. Andrea gave him life-saving first aid and several years later, when the woman’s husband sadly died of another cardiac arrest, Andrea was there to comfort her once again.

Sister Emma saved the life of a man who was in a car crash on a dangerously busy road near her home at Aughton near Lancaster. Emma was first on the scene of the crash and administered life-saving first aid. The man she saved thanked Emma though the media, describing her as his “guardian angel”.

Kerrie was described as an inspirational young woman who overcame a particularly tragic childhood accident and now uses her experience to help others. She was injured in a fire, which tragically killed her brother and now works with the Katie Piper Foundation to help people with physical disfigurements to use camouflage make-up.