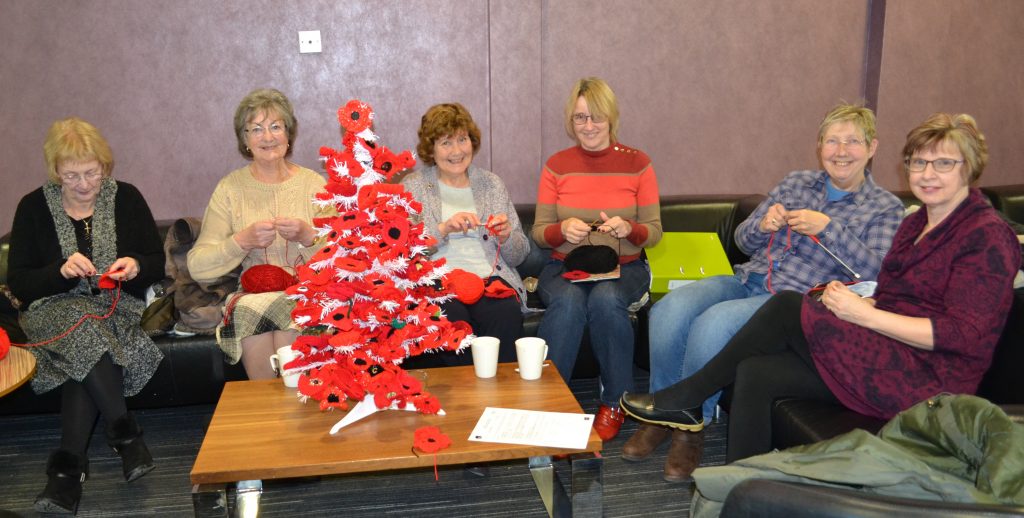 Knit and Natter members Susan, Jennifer, Yvonne and Deborah, with hosts Ginette and Debra and a Christmas tree decorated with some of the homemade poppies

An army of volunteers who are leading an appeal to knit 30,000 poppies to mark the centenary of World War One has met for the final time this year – but the poppies keep coming!

The group has been set up as part of #TheGreatBTHKnit, which is hoping to have 30,000 knitted and crocheted poppies by November next year to mark the 100th anniversary of the start of World War One next year.

The group meets in the Restaurant at Blackpool Victoria Hospital every second Monday of the month and at Clifton Hospital on every fourth Monday.

It’s a place for people to get together, make poppies for a good cause and receive a free lunch and wool thanks to staff union, Unison!

Around 2,500 poppies have already been kindly donated by groups and individuals around the Fylde coast.

Yvonne from Bispham has attended every session so far. She said: “It’s somewhere nice to come.

“Last time, I brought 200 crocheted poppies that I asked people help make. Crocheting is very slimming – it stops you eating biscuits because you want to finish a piece you have started!”

The ladies have all made new friends within the group which was organised by Unison Learning Representative Jane Eyre and is run by Ginette and Debra who can also teach knitting and crochet as well as advising on patterns and possible problems.

Ginette said: “There are hundreds of free patterns on the internet, so nobody ever need be stuck.

“Unison is funding the wool and we have free lunch vouchers, so there is nothing to lose by joining the group.

“I love knitting and with my parents both being in the forces and a son that was a RAF cadet, it’s a really good connection to the cause and a way to honour all those who have lived or died through conflict.”

Blackpool Teaching Hospitals NHS Foundation Trust has a host of World War One centenary events planned for November 2018 as well as the unique art installation made from the poppies.

The poppies can also be sponsored and a message left at the time of donation here: https://www.justgiving.com/fundraising/blackpool-teaching-hospitals.

Messages will then be used in a lasting memorial. Money raised will go to the Royal British Legion.

Anybody wishing to join in can just turn up from 11.30am on the days mentioned above. You can also join in at home or as part of an external group.

More information can be found on the Trust’s website at www.bfwh.nhs.uk