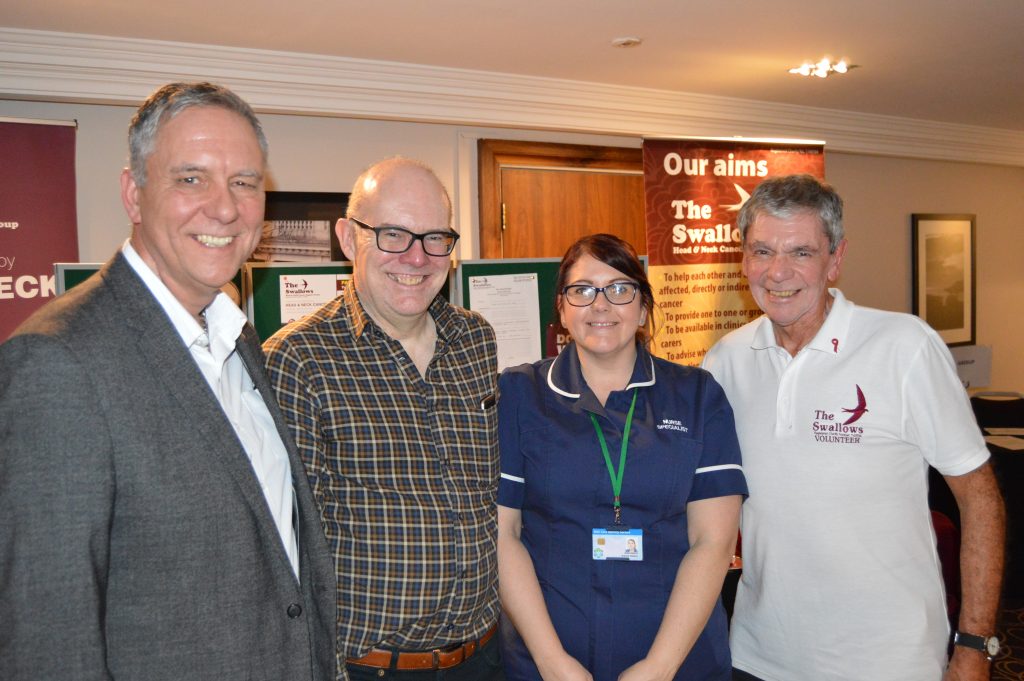 Chairman of The Swallows Chris Curtis; volunteer and former patient, John Holmes; head and neck nurse specialist, Joanne Ashton and Trustee, Peter Jefferson, at a recent ‘Living With and Beyond Cancer’ event organised by Blackpool Teaching Hospitals in partnership with Macmillan Cancer Support at the Village Hotel, Blackpool

A charity with its roots at Blackpool Victoria Hospital has won a top honour from the Queen.

The Swallows Head and Neck Cancer Charity has been presented with The Queen’s Award for Voluntary Service – the highest honour for voluntary groups in the country.

Organisers of the charity said the award was a tribute to a great team of past and present volunteers, trustees and patrons who had given support to people affected by head and neck cancer in Blackpool, the Fylde and across the UK.

The support group was set up in St Annes in 2010 and attained full charity status in 2012. It is run by patients, carers, family and friends, so everyone understands the problems faced after a diagnosis of head and neck cancer.

Chris Curtis, chairman of The Swallows, set up the charity after being successfully treated by Mr Ajay Nigam, an Ear Nose and Throat (ENT) consultant for Blackpool Teaching Hospitals NHS Foundation Trust.

Chris said: “My oncologist Mr Nigam and Joanne Ashton (a head and neck nurse specialist at the Trust) saved my life. They are both phenomenal.

“We wouldn’t have our charity if it wasn’t for Blackpool Victoria Hospital and the staff who work there.

“Mr Nigam gave me my diagnosis, operated on me and was with me throughout my treatment. He is now the Patron of The Swallows. Joanne Ashton is one of the key players – she refers people to us.

“We work across the Fylde coast and we help around 4,500 people across the UK. We have recently set up support groups in Spain and I’m going to Australia in July and America in September to teach people how to run support groups.”

Joanne said: “I am absolutely thrilled that they have had the recognition with the Queens Award.

“I have been part of The Swallows since we established the group and am proud to part of this fantastic network of patients and volunteers and to see them go from strength to strength.

“The group would not be able to function without the ongoing dedication from our patients and volunteers.

“The Swallows have been and continue to be, a huge wealth of empathetic support and friendship not only for our local head and neck cancer patients, but also reaching out to offer this invaluable support and friendship to head and neck cancer patients within our region, across England and now even expanding this fantastic charity into countries such as Spain and Australia.”

The Swallows name was chosen because many patients affected by this particular cancer have difficulty swallowing.

The group offers a 24-hour helpline, 365 days a year, with additional monthly patient and carers meetings and directions to other services, if required.

Chris and his wife Sharon attended the Royal Garden Party at Buckingham Palace on June 1 where he was presented with the award by the Lord Chamberlain.

Chris said he was honoured to accept the award on behalf of everyone involved with the charity.

He said: “Winning the Queen’s Award is an honour and testament to all the hard work of our volunteers, trustees and patrons.

“I am delighted that their work has been recognised. Without them and the support of the local community, we would not have been able to achieve the success and raise awareness of this particular cancer.

“Over the past 18 months we have been able to provide various items of equipment and support to local hospitals which assists in both the diagnosis and treatment.

“The Swallows was able to provide funding of £30,000 towards the purchase of a state of the art ultrasound scanner for the ENT Department of Blackpool Victoria Hospital. This milestone is one of our major achievement of which we are all very proud.”