Blackpool Teaching Hospitals staff who have provided excellent patient care, gained personal achievements or given long service to the NHS have been honoured at a special celebration.

The Staff Achievements Awards ceremony recognised 128 workers who had served 20 years in the NHS as well as more than 60 staff who achieved new qualifications throughout the year.

Three other awards were celebrated during the event for staff who were nominated as going above and beyond within their role. 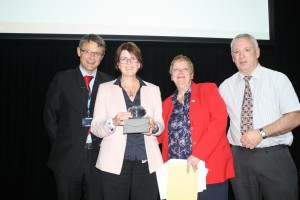 The Cardiac Nurse of the Year Award was this year awarded to Advanced Practitioner, Roberto Geronimo who works in the Coronary Care Unit. Roberto was praised for always remaining positive and for his unerring compassion towards patients.

A memorial award for the late Dottie Hall was presented to colorectal nursing team medical secretary, Beverley Whittaker. Beverley received the honour for her kindness and for going above and beyond for patients.

A final Going the Extra Mile award, tied in to the Trust’s new campaign to encourage staff to look out for each other, was presented to Wendy Canning from the Trust’s Clinical Improvement Team.

Wendy was praised for providing much needed support for a colleague who had been diagnosed with a terminal illness.