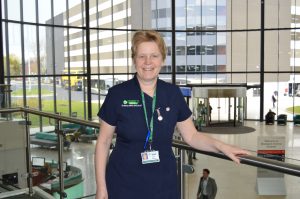 Talking about dying is something many of us avoid but clinicians say it is hugely important.

Community and hospital-based teams from Blackpool Teaching Hospitals NHS Foundation Trust are backing Dying Matters Awareness Week from May 9 to 15 and this year the theme is ‘The Big Conversation’.

Gill Cross, a Clinical Nurse Specialist and a member of the Palliative Care Team at Blackpool Victoria Hospital, said talking more openly about dying can help people to make the most of life and support loved ones.

The team, which won the title of Palliative Care Team of the Year at the British Medical Journal (BMJ) Awards at a ceremony in Westminster last Thursday, May 5, works with patients and families to provide the best possible care at the end of life.

Gill, who is employed by Trinity Hospice and has worked at Blackpool Victoria Hospital for more than 10 years, said: “It has become almost taboo to talk about dying.

“Some people think that if they talk about dying, it will make it happen.

“However, it’s a natural thing to talk about. It’s good for people of all ages to talk about what they might like to happen and to make plans.”

If a patient has been diagnosed as being terminally ill, he or she is referred to Gill and the rest of the team for symptom management, psychological support and/or advance care planning. The team members work closely with doctors, nurses and other medical specialists on hospital wards to give each person the best possible care. 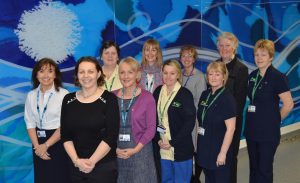 Gill, who lives in Blackpool, explained: “As a team, we work closely with patients to find out what is important to them and to achieve their goals.

“We sit down and talk with patients and family members about their wishes. Listening is a big part of our role. We look at the whole person and the whole family.

“It’s not just about where people want to be when they die, it’s about how they want to be cared for while they are with us.

“It’s about quality of life. For example, we can arrange a fast discharge from hospital if someone is in the last weeks or days of life.

“People share a lot of things with us. We are in a privileged position.

“I love my job; it’s really satisfying. If I can improve someone’s quality of life by stopping them vomiting, easing their pain or making their life better in some way, I think that is everything.”

The hospital and community teams will be encouraging people to talk to each other about dying, death and bereavement throughout the awareness week.

Members of the public will be able to pick up information, chat with staff and join ‘The Big Conversation’.

Dying matters information has also been circulated to all GP practices across Blackpool, Fylde and Wyre in collaboration with Trinity hospice.

The awareness week has been organised by the Dying Matters Coalition to encourage people to talk openly about dying, death and bereavement.

Members of the coalition say every minute someone in the UK dies but many people still don’t feel comfortable about exploring the subject. With an ageing population and people living for longer with life limiting illnesses, discussing dying is increasingly important.

Blackpool Teaching Hospitals NHS Foundation Trust is one of 30,000 members of the national Dying Matters Coalition. Members include organisations from the health and care sectors, community groups, social care and housing, faith groups, the legal profession and the funeral sector. 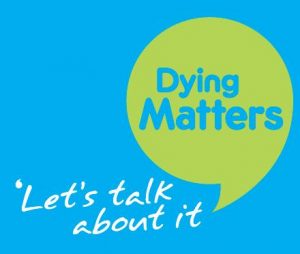 Set up by the National Council for Palliative Care (NCPC) in 2009, the Dying Matters Coalition aims to encourage people to talk about their own end of life issues with friends, family and loved ones in order to make ‘a good death’ possible for the 500,000 people who die in England each year.

Research for Dying Matters has found that many people have specific wishes about their end of life care or what they would like to happen to them after their death, but a reluctance to discuss these issues makes it much less likely that these will be met. There are major discrepancies between people’s preferences for where they would like to die and their actual place of death; 70% of people would prefer to die at home but around half currently die in hospital.

Claire Henry, Chief Executive of the Dying Matters Coalition and the National Council for Palliative Care, said: “Talking about dying, death and bereavement is in everyone’s interests as it can help ensure that all of us can get the care and support we want, where we want it, at the end of our lives.

“Through being more confident in talking about dying, we can make a big difference.”

For more information on the awareness week go to: www.dyingmatters.org