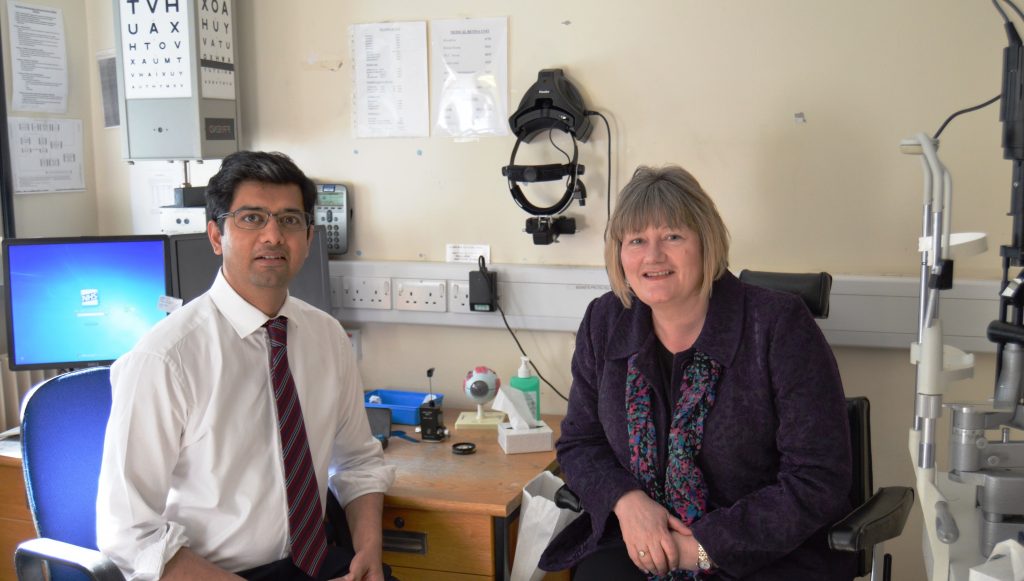 A BLACKPOOL Teaching hospital vitreoretinal surgeon has saved the sight of a Kirkham woman.

Mr Rajeev Tanawade, also a consultant ophthalmologist, acted quickly when scar tissue was found in Susan Wharton’s left eye following corrective surgery for a torn retina and operated on the eye within days.

Civil servant Susan was amazed at the speed and delivery of the service and care she received. She said: “I was told I had received the most up-to-date diagnostic treatment possible, which I was so grateful for.”

After a frightening visual disturbance, Susan was originally admitted to Blackpool Teaching hospital with a suspected stroke.

After three days of tests, she was transferred to the eye clinic where they found Susan had a torn retina. Just when she thought she had got through one corrective laser surgery, a torn retina was then detected in her other eye, so she needed surgery again. This was when the scar tissue was spotted.

Mr Tanawade said: “Susan was treated for multiple retinal tears and was referred to me with an aggressive scarring membrane over the retina in her left eye causing very severe visual loss, significant distortion and double vision. She underwent a pars plana vitrectomy and membrane peel and I am very pleased that she’s had an excellent result and it has made a huge difference to her life.”

Susan’s eyes are still being monitored regularly, but her vision has improved greatly. She concluded: “A big part of my job is working on computers and like most people I have to drive to work.

“I really do think that because Mr Tanawade and his team hadn’t acted so quickly, I would have been able to do very much at all. I have a lot to thank him for.”