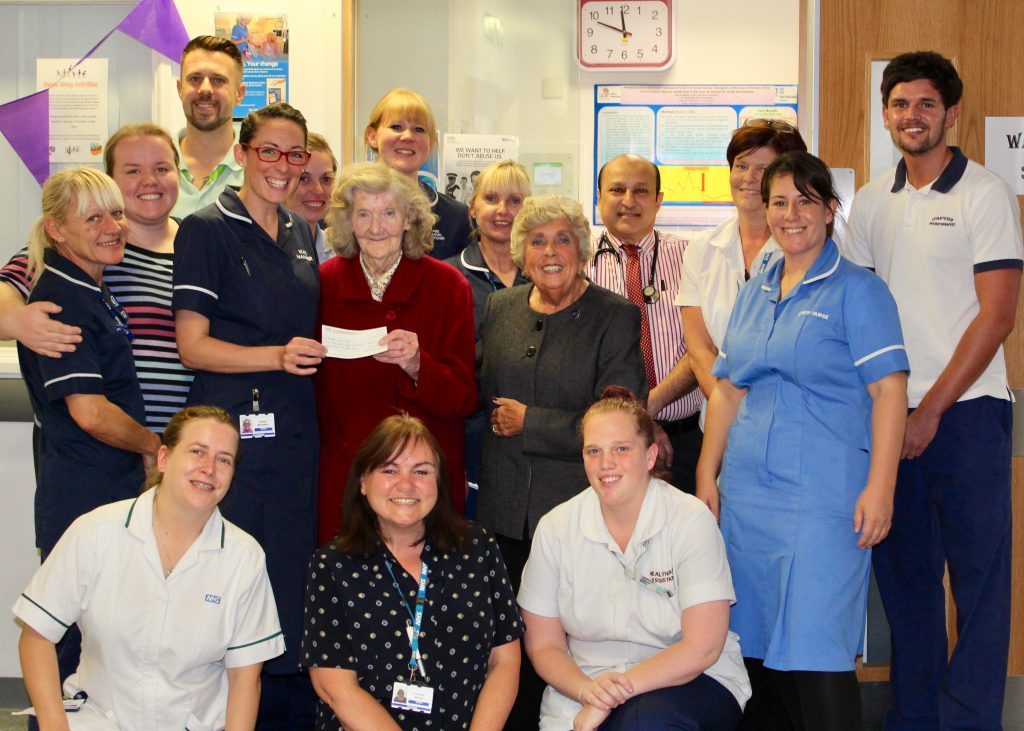 Pauline and Peggy with staff on the Stroke Ward

FYLDE coast stroke patients will benefit from a charity legacy thanks to the work of a nationally recognised former nurse.

The Blackpool Jubilee Stroke Association (BJSA) was formed in 1977  by nurse Ethel Dobbins and her colleagues at Blackpool Victoria Hospital.

Ethel retired from the hospital but continued to work for the charity, supporting stroke patients and their carers, until she died in 2014 at the age of 99. That year, she had also received the British Empire Medal for her service to the community.

The BJSA took the difficult decision to shut down recently but not before it celebrated its 40th anniversary with members reaching a consensus that the surplus cash, £2,150, would be donated to the Blue Skies Hospitals Fund for the Stroke Unit at Blackpool Victoria Hospital.

Treasurer Pauline Westmoreland, who joined a year after the charity was founded, said:  “Over the years the charity provided advice and information, as well as facilities for recreation.

“We organised indoor and outdoor activities, including day trips and music evenings in order to improve the wellbeing of patients who have suffered disablement from strokes.

“We also organised fundraising activities, such as summer and Christmas fairs, to meet the costs.”

Unfortunately, in recent times, the number of members dwindled, while the costs of running the charity escalated.

“When we started off we could get an ambulance for free and didn’t have to pay to hire a hall for our Friday meet-ups.”

Chairlady Peggy Byrne said: “As a stroke charity, we were obliged to donate our surplus to stroke-related causes. So it made sense to give it all back to where it came from in the first place.

“We are happy that the money will benefit future stroke patients.”

“We will make sure that the money is well spent while doing something commemorative to recognise the work done by the group over the last 40 years.”

If you would like to find out how you can support the Blue Skies Hospitals Fund charity you can contact them on 01253 957904 or email blueskies@bfwh.nhs.uk.