It should have been the trip of a lifetime for Lytham St Annes couple, Paul and Maria Mahon. 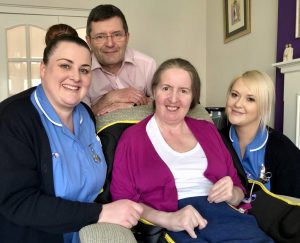 The couple had taken very early retirement, their house had been sold, possessions put in storage and their cars left at an auction house.

Paul and Maria, both in their early 50s, had been training for their cycle expedition for months. They were to make their way through Cuba, Nicaragua, Costa Rica, Panama, Chile and Columbia.

But tragedy struck on the 11th day of the four-and-a-half month trip when Maria suffered a devastating primary ventricular fibrillation (PVF) which meant her heart had gone into spasm and she was unable to breathe.

In an isolated area of Cuba, two hours away from the capital Havana, it was difficult to summon help. A chance encounter with two German doctors meant she was given CPR, but the journey to hospital was long and arduous. 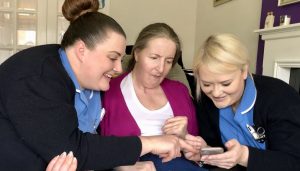 The District Nurses engage Maria with a phone video

Paul explained: “At the hospital Maria was sedated and put on oxygen. I was told she had suffered a brain trauma and could not walk or talk . She never opened her eyes the whole time we were there.

“The medical staff at the hospital were lovely, but the facilities were primitive. I just lay on the bed with her and tried to reassure her, I could not believe how ill she had become.”

Paul said the tour operators and travel insurance company were amazingly supportive and five days later a Learjet was commissioned to fly Maria and Paul the 16-and-a-half hour journey home. 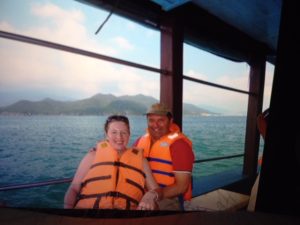 Maria and Paul on an earlier holliday

“But we had no home,” said Paul. “We had sold our house in Sussex and everything was in storage. The plan had been for us to rent somewhere when we returned to England.”

“I asked for us to be taken to a hospital near to Warrington where my parents lived. There was an intensive care bed available at Warrington and Maria spend 6 weeks in ITU and 6 weeks on a rehabilitation ward before being transferred to the neurology hospital, Walton Centre, in Liverpool.

“I went to live with my mum and dad during this time, but we needed to buy a house and we decided to make Lytham St Annes our home because Maria’s brother, Robert Ellison, a neurological physiotherapist, lived nearby and he was keen to try to help his sister.”

And it was then Paul and Maria met two Lytham District Nurses, Rachael Coxon and her colleague Rachel Jump, who became the mainstay of their care.

“We were able to sort equipment for Maria, such as bed and mattress extenders and we manage her day-to-day care,” explained Rachael. “She recognises us and understands everything you say to her. Maria is making great progress and is now able to communicate in a limited way by pointing to the words yes or no and can make decisions about what to wear by indicating a preferred outfit.”

Paul said he was incredibly grateful for the medical and emotional support he had received from the NHS, family members and other carers since moving into Lytham a year ago.

“With the support of the Lytham District Nurses, Maria’s brother, her neurological consultant, Dr David Shakespeare, the Brain Injury Rehabilitation Trust and Clifton Home Care, Maria is now able to sit in a lounge chair, watch and enjoy TV and go for trips out in a specially adapted car.”

Rachael added: “When we first met Maria she was very anxious, her movement and posture was very rigid and her skin was extremely sensitive. That has all improved massively. She has also improved cognitively and we hope this will continue.

“Just Rachel and I visit Maria from the District Nurse team because when we first met her, her condition was so complex we thought it better to keep to the same faces so she could build a rapport with us. Now we have become very fond of Maria and Paul and helping families like this is the reason we are in nursing. It gives us tremendous job satisfaction to see this improvement.”

And this rapport is vital for Paul who says having just two regular nurses means he does not have to go over the same things every time a district nurse comes to the house. They have made an enormous difference to his quality of life and have become friends.

“I can turn to them if ever I need help or reassurance,” Paul explained. “And because they know Maria so well now they are able to advise on things that work for her and her rehabilitation. The trust we have built up is immense. They take some of the worry away and nothing ever seems too much trouble. If Maria needs something, they go out of their way to ensure she gets it as soon as humanly possible.”

Paul said he had also received fantastic support from his parents who had moved from Warrington to Ansdell to help care for Maria cooking meals and reading to her every day.

He also paid tribute to the care Maria receives daily from her brother, Rob. “He worked tirelessly for Maria, travelling to Warrington from Lytham, 100 mile round trip, four times a week while she was in ICU and rehab while still seeing his own clients. He came every day once she got home and is the reason she is no longer as stiff as she was.”

“Maria’s care would be impossible without the kindness and care of the community and doctors. We are now looking at the possibility of a couple of holidays and Maria has even joined the local Connect Community Choir where although she cannot join in the singing, she is able to enjoy to company and do the warm-up stretching exercises.”