The number of sepsis deaths at Blackpool Victoria Hospital has been halved through innovative changes to treatment methods. 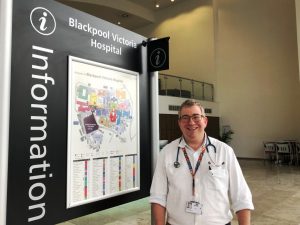 Following a year of intensive work, the death rate from the disease has been dramatically reduced through major changes to diagnosis and treatment.

In 2014 the hospital’s sepsis mortality rate was the third worst in the country with 30 to 35 per cent of sepsis patients dying from the disease. This has now been cut to 15 to 18 per cent putting Blackpool Victoria in the top 30 per cent of best performing hospitals nationally.

The hospital’s Quality Strategy Lead, Professor Morris Gordon, said: “The disease can affect anyone and if it is not treated immediately it can attack the body’s own organs and tissues. It is the body’s extreme response to a serious infection and can cause multiple organ failure. Once that process starts it is very hard to stop.

“We were concerned about our sepsis figures but, despite various attempts at addressing the problem, there had been no change to the actual number of people affected or the mortality rate from sepsis.”

A multi-professional group was formed, made up of doctors, nurses, pharmacists, microbiologists, ambulance staff, improvement managers and emergency department staff who are the front door of the hospital and see patients when they first arrive.

The group went back to basics to trace the journey of a patient with sepsis and started to look at the problem in a different way.

Prof Gordon added: “We needed to put more emphasis on sepsis when a patient first arrived at the hospital. The evidence showed that a patient diagnosed and treated within one hour had a 50 per cent reduction in the chance of dying than one treated within four hours.

“To achieve this one hour target we instigated a sepsis bleep so the triage staff, who are the first people to see patients, could immediately contact a medic able to deliver specialised treatment immediately.

“We also developed a designated Sepsis Response Trolley to be available in all the acute areas of the hospital. This trolley included all the elements needed for diagnosis and treatment, including the necessary antibiotics. The trolley saved valuable minutes from being wasted finding and gathering equipment needed and empowered the medical responder and supporting nurses to rapidly deliver the package of treatment.”

“We decided to target treatment within one hour of a patient’s arrival at hospital rather than an hour from diagnosis. This target was more ambitious than any other hospital in our area and was born out of a visit from colleagues at the Royal Liverpool hospital who had seen excellent results with their sepsis targets.”

The final element in the sepsis fight was increased education for all new medical staff and staff in the emergency departments. This did not just tell them what to do but explained why in a manner that supported staff. This education is a rolling programme to encompass all staff.

“Bringing the importance of early diagnosis and treatment to the fore was a visit from sepsis survivor, Tom Ray, who spoke to staff about his experience in a devastatingly honest and powerful presentation about how sepsis impacted him and his family,” Prof Gordon added.

“The chances of death from sepsis has halved at this hospital since we started work on this project and this reflects a greater improvement that any other national study has ever produced.

“All of us involved in these improvements are very proud of the impact this has had on our patients’ lives,” he added.

“Special thanks should be paid to the doctors, nurses and other professionals, especially those in our busy emergency department, who have worked above and beyond what is expected. Despite times of huge pressure they have continued to surpass our expectations and have offered a tremendously high quality of care for sepsis patients.”

Commenting on the success, Trust Medical Director, Prof Mark O’Donnell said: “This is a remarkable improvement in sepsis management in the Trust. Sepsis can affect people of any age and if not caught early and treated appropriately can have devastating effects on sufferers.

“It is a huge achievement to see such good results. We all owe a great deal to the work led by Professor Gordon and involving a huge number and range of staff from all areas of the Trust and especially the Emergency Department and colleagues in the ambulance service.”