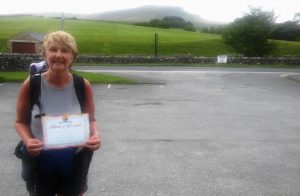 For more than 20 years Michelle had yearned to climb the famous Yorkshire Three Peaks, but life and work always got in the way.

“Completing the three peaks challenge was on my bucket list. It was about 20 years ago that I first said I wanted to do the three peaks, but I never got around to it,” Michelle explained.

And this month Michelle finally realised her dream and raised £400 for the bereavement support group, Snowdrop Centre and Donna’s Dream House.

Michelle, a support nurse specialist at Blackpool Teaching Hospitals NHS Foundation Trust, works with the Snowdrop Centre helping parents, carers and family members who have experienced the death of a child.

The Centre is supported by Donna’s Dream House, which offers holidays for children with life-threatening illnesses.

“I completed the 24.5 mile challenge in 12 hours as part of a group organised by Alfresco Adventures,” Michelle explained. “I thought I might as well try to raise some money for the Snowdrop Centre and Donna’s Dream House while fulfilling a lifetime dream.

“It was very tough. The views were amazing, but it was blisteringly hot. We were at the top of Penyghent by 9am and we could see stunning dales views for 360 degrees. Even though the challenge was very hard, the feeling of achievement at the end is unbelievable.

“Most of the money raised was pledged by families I have helped through the Snowdrop Centre and I took their sponsor forms with me so I felt I was taking my families with me.

“However tough this challenge was I just thought about what the families go through. Twelve hours out of my life is nothing compared to a lifetime of grief.

“I raised £400 in sponsorship for the walk which will be used mainly for the annual Snowdrop Remembrance Service which is held every February at Lytham Hall.

“This event has meant such a lot to bereaved families. For those families who do not have a place to go to remember their child it is of particular significance.”

In September she takes on the Shine Night Walk – a 26 mile full marathon walking through the streets of London at night to raise money for Cancer Research.

Michelle is taking on this challenge in memory of her beloved mum who died from bowel cancer in 2005.

She said: “I have to raise £260 minimum which Cancer Research asks each participant to collect in sponsorship.

“I am so proud to have taken on both these challenges and to have raised money to help very worthy causes. The physical challenge has also improved my fitness and I’ve lost two stone since last October!”

If anyone would like to sponsor Michelle they are asked to contact her either via her work mobile on 07920138112 or by email at michelle.boland@bfwh.nhs.uk.