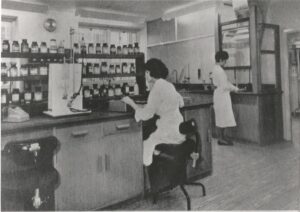 The Biochemistry lab at Blackpool Victoria Hospital in the 1960s

Blackpool Teaching Hospital’s Pathology directorate brings together a range of services which all fall under the umbrella of ‘Laboratory Diagnostics.’

Many of these fields are all about the study of disease, its causes and progression. Healthcare laboratories are involved in over 70% of diagnoses in the NHS and handle hundreds of millions of patient samples every year.

Science is continually evolving and becoming more sophisticated. If we take diabetes for example, in medieval times people known as ‘water tasters’ diagnosed diabetes by tasting the urine of people suspected to have it. If urine tasted sweet, diabetes was diagnosed. Fasting diet and exercise were prescribed and diabetes inevitably led to premature death.

Since its discovery in 1920 insulin is still the primary therapy used to treat type1 diabetes. Diagnosis is facilitated by the biochemistry laboratory with a Glycated haemoglobin (A1C) test. This blood test indicates your average blood sugar level for the past two to three months. Advancements have also enabled diabetic patients to test and monitor their blood sugar levels at home.

Since the directorate’s founding in 1961, much has changed in the science behind diagnosing diseases. Historically, a process might typically involve culturing a swab, incubating it for 24-48 hours, followed by biochemical tests to identify which micro-organism has caused the infection taking a further 24 hours.

Bacteria can now be analysed by mass spectrometry in a matter of minutes after day one to identify the causative organism and treatments can be suggested based on those findings.

Advances in science have meant that much more is done by Polymerase Chain Reaction (PCR) which identifies the genetic material of the organism in the sample and can give a result within an hour or two. PCR is also used to diagnose cancers and the histology laboratory work closely with the Cancer Alliance to facilitate this service.

Dawn Singleton, BTH’s pathology directorate manager, has worked in the field for more than 36 years, and remembers when her career began, flame photometers were used to determine the concentration of sodium and potassium in serum samples. The sample was introduced to the flame and levels were determined by the intensity of the flame colour.

Automation has significantly improved accuracy and capacity across all departments for all tests. 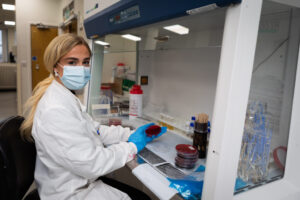 Dawn said: “In the early years when I first started there were bedrooms within the department for the staff who were on call. If they were lucky, they would only have to get out of bed four or five times each night. The rooms have now been converted to offices and the blood sciences service is run constantly 24/7 every day of the year.

“Quite rightly, rules and regulations have become more stringent, and everything is focused on quality. For instance, we’re regulated by the Medicines and Healthcare Regulatory Agency (MHRA) for blood bank, and the Laboratories are UKAS accredited. Anyone practising as a biomedical scientist must be registered with the Health and Care Professions Council (HCPC).”

Dawn added: “The work we do is carried out to very high standards.”

There are around 250 staff who work under Pathology at BTH. Traditionally, biomedical scientists would have gone to college on day release for up to four years to pass their HNC. Now university degrees have been the standard way to begin a career in one of these areas although recently we have biomedical science apprenticeships which give staff the opportunity to work in the laboratory whilst gaining their qualification. The department has a range of staff from consultants and clinical scientists to BMSs, assistant practitioners, laboratory assistants, phlebotomists and other administrative staff.

In the last 18 months we have developed many services in response to the Covid-19 pandemic – a hot-lab within the trust to deliver Covid-19 tests within 20 minutes for all admissions and a ‘drive-through’ service for ADAS based at various locations in the region to enable patients to receive treatment outside of the hospital setting.

Dawn explains that it is a very rewarding career, and for many it’s a ‘job for life.’

At BTH the Pathology directorate is part of the Lancashire and South Cumbria Pathology Collaboration. While the Trust will maintain its own ‘essential’ Pathology services, in future it will also work together with East Lancashire Hospitals, Lancashire Teaching Hospitals and University Hospitals Morecambe Bay to deliver most of its services from a centralised hub in Samlesbury whilst remaining at the forefront of diagnostics.

Dawn said: “There is never a day when I don’t want to come to work. I absolutely love my job. That feeling of helping people and doing the best for the patient is overwhelming and we play a massive role in that even though we aren’t always patient facing.

“I would encourage anyone thinking of getting into these areas to just go for it – it’s a rewarding career with lots of opportunities for growth and learning – science is evolving so fast and the jobs we do are evolving with it.”