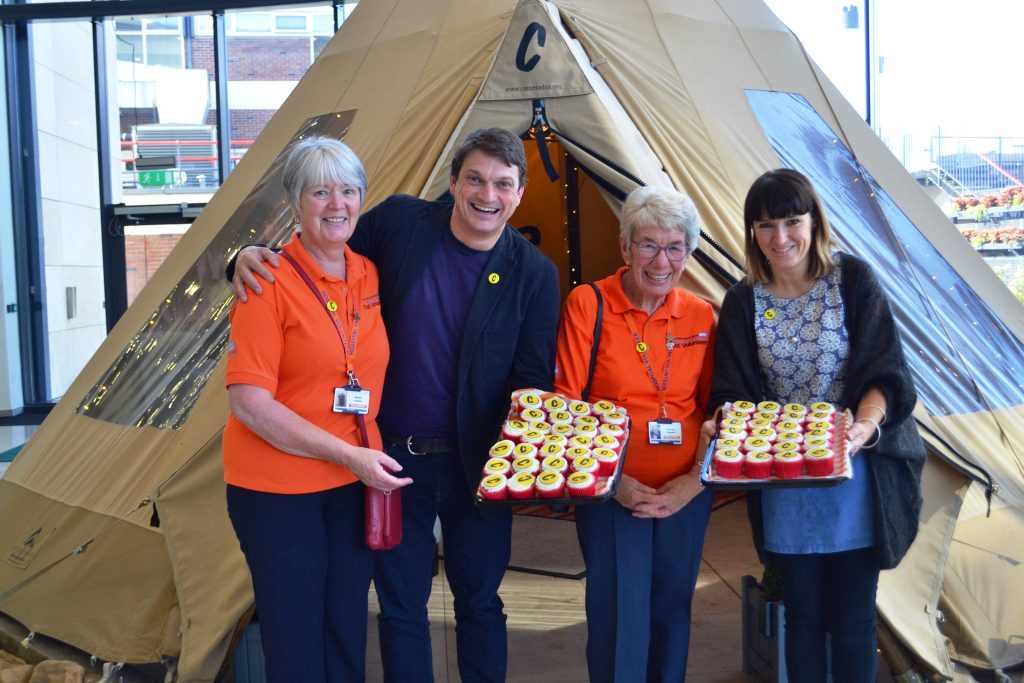 Maff and Izzy with Trust Volunteers

Blackpool Victoria Hospital had said ta-ta to the Camerados teepee.

The tepee was located in the main entrance of the hospital and has been welcoming a host of keen visitors since the end of June.

Founder of Camerados, Maff Potts, travelled from Oxford to bid farewell to the teepee along with Development Manager, Izzy Harriss and gave away special Camerados cupcakes.

The idea behind the teepee, is that it provides a comfortable place where anyone can come, on good days and bad, to be around people, make connections and enjoy being out of the house, office or ward.

This year, there were also pop-up Camerados spaces – comfortable chairs and lamps – in Clifton Hospital and in the Education Centre of Blackpool Victoria Hospital

Maff said: “Huge thanks and respect to Blackpool Teaching Hospitals for joining the Camerados movement and providing a space where people having tough times can lean on each other and on strangers.

“They’ve recognised their hospital is a place of stress for staff, patients and visitors alike. The stories and data show that people have stepped up and looked out for one another, sometimes at heartbreakingly difficult times.

Patient Experience Lead, Andrew Heath, said: “Hosting Camerados and the teepee for a second time has again delivered a positive impact on the experiences of our staff and also our patients and visitors to the Trust. 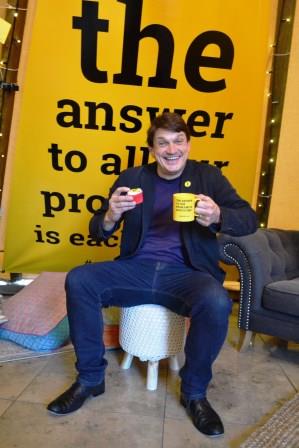 Maff enjoys tea and cake in the teepee

“It has quite obviously demonstrated that this wasn’t about novelty factor and that even though it was here for considerably longer interest was sustained throughout.

“We will continue to work with Camerados  to enable them to realise their ambition of improved social connection. Whether that means bringing the teepee back or creating other spaces is still to be decided.

“Camerados will be providing their learning from their work at the Trust’s Grand Round meeting on November 7.”

They’ve discovered that the best way to get these two things is to look out for each other. People in tough times helping others in the same boat, as equals, a two-way thing.