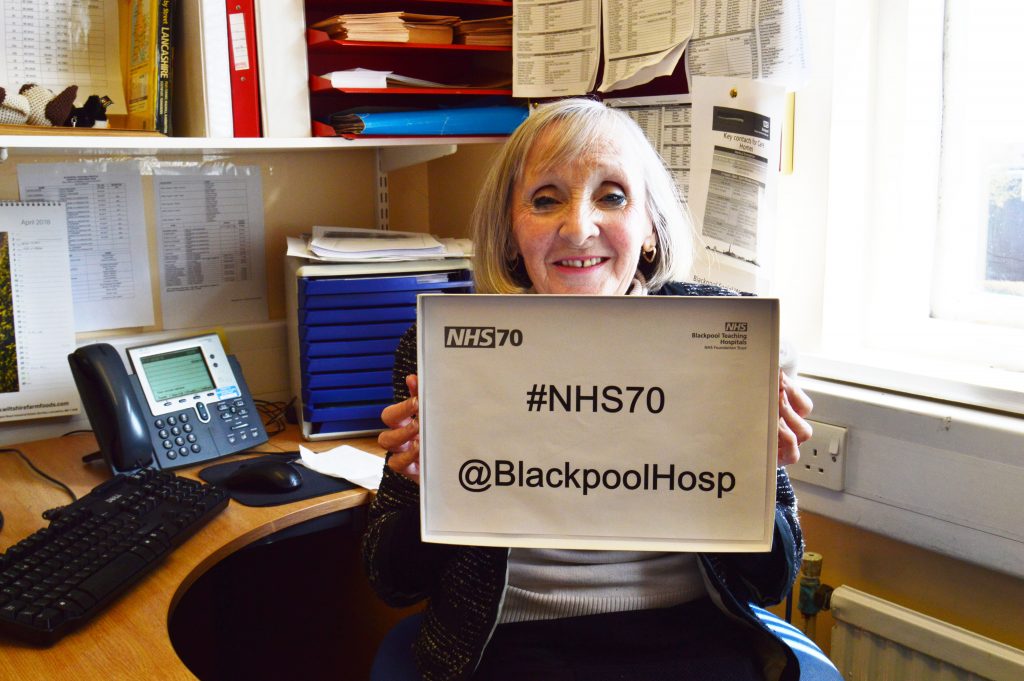 A hospital Administration Assistant is hitting two milestone anniversaries this year which are both linked to the NHS.

Maralyn Stephens, from Layton, will be celebrating her 70th birthday three days after the NHS hits the same milestone and will also be reaching her 46th year of working for Blackpool Hospitals NHS Foundation Trust.

The NHS is 70-years-old on July 5 and Maralyn turns 70 on July 8. It is a date that her mother was very grateful for.

Maralyn said: “I was the first child in the family to be born in the NHS.

“I was due to be born on July 4 but the doctor said to my mother that if she could hang on and give birth from the July 5 onward her care would be free. She was very happy that I was born on the eighth!”

Maralyn was born at the Glenroyd Maternity Hospital on Whitegate Drive. She was later to give birth to her daughter in Blackpool Victoria’s new maternity unit in 1975, which replaced the Glenroyd’s services in 1974.

She continued: “My mother was amazed at the free healthcare the new NHS provided – as were many people of her generation. They had to remind themselves that they didn’t need to pay.

“Before the NHS was formed, people didn’t go to the doctors too often as there was a cost involved.

“Doctors were always well respected and you didn’t want to waste their time either. There is a different way of looking at things these days.”

Having started working for the NHS in December 1972, Maralyn was based at Devonshire Road and Whitegate Drive before moving to Blackpool Victoria Hospital in the Hospital Discharge team. She also worked in the hospital’s Urgent Care Centre at evenings and weekends on top of her day job.

She said: “There is no comparison to the Trust from when I started, it has grown so much.

“I wanted to work for the NHS as it was a stable job with a good pension. I didn’t ever think of working elsewhere and apart from maternity leave I have continuous service.

“I really enjoy my current role. It gives me a purpose to get up in the morning. The NHS has been there for me since day one and I guess I’ve been there for it too for nearly 46 years.”

Maralyn will be spending her birthday with her family but also hopes to join the special NHS70 events being held at Blackpool Victoria Hospital between July 2-6. For more information, check the Trust’s Facebook page: www.facebook.com/BlackpoolHospitals.