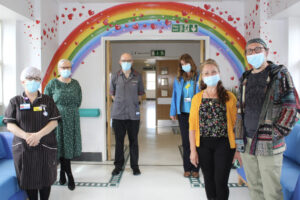 The link corridor on the second floor has been redecorated, supplied with comfy chairs and painted by two volunteer artists with inspirational quotes, portraits and poppies. It has been named after Sir Tom for his fundraising efforts, some of which have supported staff and patients at the hospital via the Blue Skies charity.

The space can now be used as a rest area by staff, as somewhere different for patients to relax, and is to be used by the physiotherapy and occupational therapy teams.

In a special ceremony the space was opened on Friday, to mark the birthday of the late Captain Sir Tom Moore. 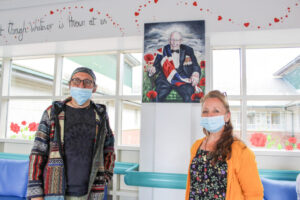 Present at the opening were staff from the Care of Older People wards (wards 23-26), the Trust’s Director of Nursing, Peter Murphy, Divisional Director of Nursing, Lisa Horkin, Maria Jennings, Clinical Matron for wards 23-26, Joanna Allitt of Blue Skies and artists Karen Grundy and Quinton Rae, who work in the Artificial Eye Service at Blackpool Victoria.