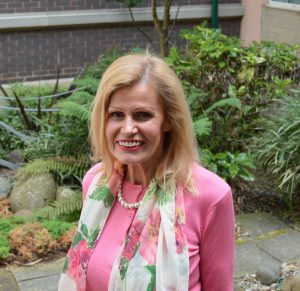 Survivors of bowel cancer are urging people to take a simple test to rule out the disease.

Nicola Seymour, one of the founding members of the Phoenix Bowel Cancer Support Group, says early diagnosis is the key to staying well.

Nicola, who lives in Blackpool and works in Preston selling fitted bedrooms, explained: “One thing that everyone in our group preaches is taking the bowel cancer test.

“Members of our group who were caught in the early stages of bowel cancer had all taken the test. The survival rate is much higher if it is caught early on.

“I was diagnosed in the final stages – unfortunately the test wasn’t available at that time. I’m lucky. I’ve had two operations, chemo and radiography and I’m still here. I’m in my sixth year now and I feel great.” 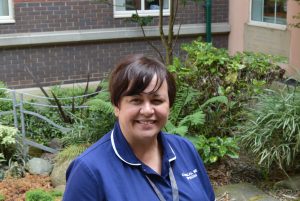 “The symptoms of bowel cancer can include bleeding from the bottom or blood in your faeces, a change in your bowel habit lasting more than three weeks and/or abdominal pain.

“A lump in your abdomen, unexplained weight loss, tiredness, dizziness and/or breathlessness can also be symptoms.”

If you have or develop any symptoms it is important that you see your GP who can assess you and refer you for investigations.

Nicola said some people can be embarrassed to see a doctor but there is no need to be concerned.

She said: “People get very embarrassed about bowel cancer but they must not worry.

“The doctors and nurses are completely used to it. The members of staff in the colorectal unit deal with everyone with great sensitivity.

“Debbie Procter and Gill Towers, the colorectal nurses, are fabulous. They treat every patient with respect. They are caring and they are so knowledgeable.

“I can’t say enough good things about them. Every single patient who has dealt with them has said the same thing. Their care is always consistent.

“They also work with the support group in their own time. They have been with us every step of the way.”

Louise Newton, Lead Specialist Screening Practitioner for The NHS Bowel Cancer Screening Service – Lancashire, which is based at Blackpool Victoria Hospital, stressed that patients with symptoms should see their GP as a matter of urgency. 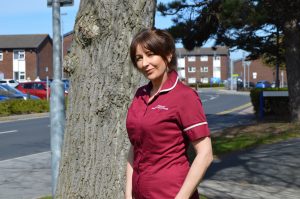 Louise also stressed the importance of taking part in screening by completing a simple FOBt (Faecal Occult Blood) kit. This service can detect cancer at an earlier stage, even before symptoms have developed and it can actually prevent a cancer from developing through the removal of polyps.

The FOBt kit is offered to people aged 60 to 74 years. People aged 75 and over may request a screening kit by calling 0800 7076060. Once complete, the person taking the test simply returns it in the post to a central laboratory for testing.

Louise explained: “We would urge everyone to complete the simple FOBt test which detects blood hidden in small samples of poo.

“You complete the test over the course of a few days in the privacy of your own home.

“A FOBt test does not diagnose bowel cancer but will identify blood in the faeces.

“A positive test will trigger an invitation to see a Specialist Nurse from the Bowel Cancer Screening Team in a local clinic for a consultation and following on from this an colonoscopy  investigation can be arranged to find out the cause of the bleeding.”

Louise advised that a specialist screening nurse would be at that investigation to support the patient during and after the procedure.

She added that the Bowel Cancer Screening Specialist Nurses work closely with Gill and Debbie’s team of Colorectal Cancer Nurse Specialists at Blackpool Victoria Hospital and also other hospitals throughout Lancashire, to ensure a timely and seamless referral pathway for those patients where a cancer is suspected at investigation.

The Phoenix Bowel Cancer Support Group usually meets on the first Tuesday of every month but due to a bank holiday, the next meeting will be on Tuesday, May 7, in the Windmill Suite at the Macmillan Unit at Blackpool Victoria Hospital. The group has been going for more than a year and it has 30 members. 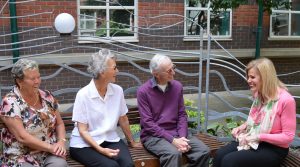 For more information on the Phoenix Bowel Cancer Support Group go to the website: www.phoenixgroupbvh.co.uk or email: phoenixbvh@aol.com or call 01253 291919.

More information in bowel cancer can be found at: