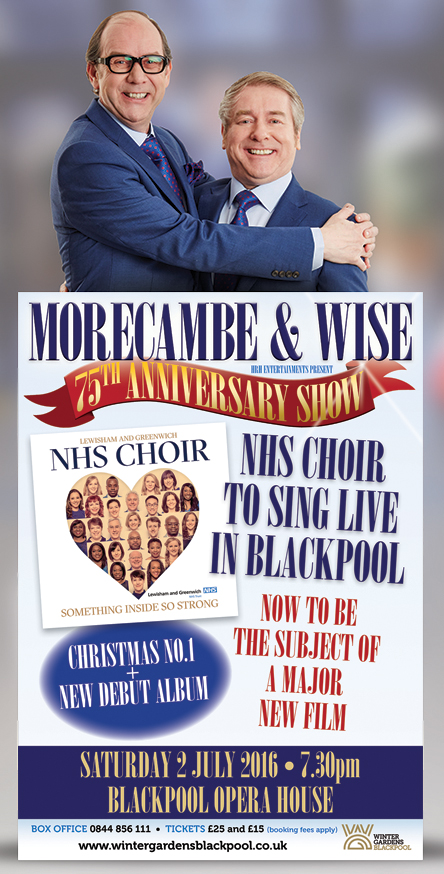 Organisers of a Morecambe & Wise 75th Anniversary Show, featuring the NHS Choir, will donate some of the funds raised on the night to enhance care for bowel cancer patients at Blackpool Victoria Hospital.

The NHS Choir will appear in the show at Blackpool Opera House on Saturday, July 2.

And the choir has just signed a film deal to tell the story of its amazing rise to fame.

The Lewisham and Greenwich NHS Choir beat Justin Bieber to the Christmas Number One spot after he urged his 72 million Twitter followers to buy its charity single, A Bridge Over You.

Film producer Julia Verdin, who worked on The Merchant of Venice starring Al Pacino, has secured the story’s rights.

She said: “The NHS choir’s story was remarkable and had already touched the hearts of millions.

“The movie will feature the individual back stories of the 32 choir members and the work they do, documenting their journey to get their song to the top of the charts.”

Choir co-ordinator Caroline Smith said: “The singers are thrilled the world will now get to see the incredible story of the NHS Choir.

“The choir members are very excited to be part of the Morecambe & Wise 75th Anniversary Show at the amazing Blackpool Opera House. We’re looking forward to performing in such an historical venue and hope to bring sunshine and joy with our singing.”