Connor and his sister Sacha on their special trip to Amsterdam

A mum who works as a healthcare assistant was “overwhelmed” when her colleagues in the Emergency Department rallied round to help her chronically unwell son to go on a special holiday.

Jo Mahon’s 25-year-old son Connor has cystic fibrosis – a chronic medical condition affecting the lungs – and when he was about to go on holiday he was told he would have to pay £250 extra for oxygen and equipment.

When the Emergency Department team at Blackpool Victoria Hospital heard about Connor’s plight they had a collection and quickly raised £280.

Jo, 47, from Blackpool, who has worked in the Emergency Department for 21 years, said the whole family was in tears of joy when the A&E team made the kind gesture.

Connor had been in and out of hospital for months and he hadn’t had been well enough to have a holiday for nine years so and Jo and her partner Chris, 45, had bought tickets for him and his sister Sacha, 27, to go to Amsterdam.

Jo said: “Connor was so excited but when he was tested to see if he was ‘fit to fly’ they said the oxygen and equipment would cost £250 to hire.

“Sacha called me at work and I was really upset. We just didn’t have the extra money at that time.

“A couple of days later everyone in the Emergency Department from housekeepers to doctors and nurses, gave us the money. They had secretly collected the money. On Saturday (September 9) they gave it to me. There was £250 for the oxygen and £30 spending money for Connor and Sacha.

“I cried my eyes out. They had done it for me and Connor. It was lovely. I’m still overwhelmed by it. I’d like to say thank you so much to them. It’s the best team ever to work with.” 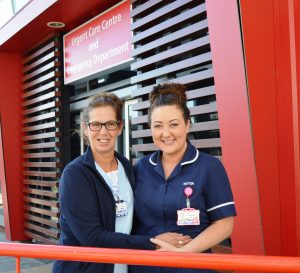 Connor, who lives at home with his family in North Shore, regularly attends Wythenshawe Hospital’s adult cystic fibrosis centre for treatment. Sacha is a healthcare assistant on the ‘bench’ (bank) at Blackpool Victoria Hospital.

Shelley Davies, 27, from Blackpool, a Sister who works with Jo in the Emergency Department, said: “We thought we could all get together to help to pay a little bit of the bill.

“The whole team wanted Connor and Sacha to have the best time ever.

“I have known Jo for years. She is really friendly. When you’re working with her you know you are going to have a good shift. She is always smiling and laughing.

“Connor sent me a cute message from Amsterdam. I cried when I read it.

“He has been to A&E a few times so people here have met him. They know about his CF so we thought it would be nice to do something for Connor and Jo.

“It can be very hard working in the Emergency Department so it has been nice to have something positive to focus on.”

Jo added: Connor and Sacha are back now and they had a great time. They visited lots of attractions and a cat sanctuary on a boat – Connor is cat mad!

“He is at home most of the time due to his illness. He’s very funny and everyone says how polite he is.

“Connor’s holiday was a really big thing for him. He has to cope with a lot and I’m so happy that he has had this break.”