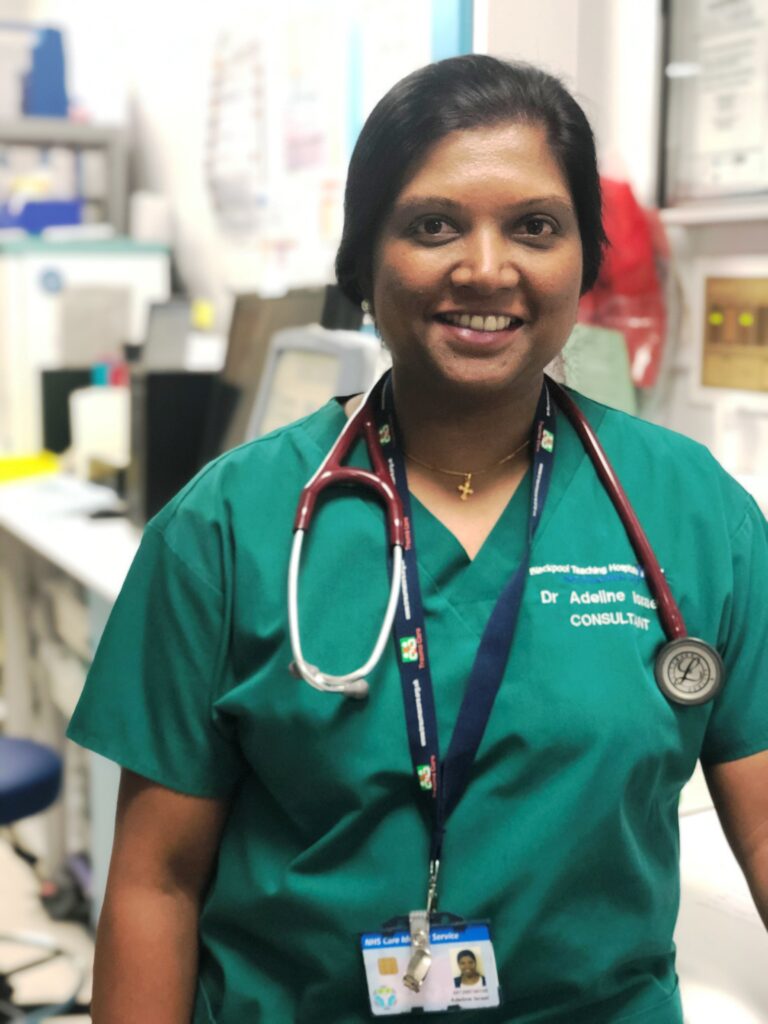 Dr Adeline Israel is an Emergency Department (ED) consultant at Blackpool Victoria Hospital and is also the ED lead in the Emergency Village and Critical Care Development.

Her motivation for studying Emergency Medicine was when she was 15 years old and she witnessed a car driving off a cliff edge but could do nothing to help the driver.

Feeling so helpless in this situation, she decided to make sure that she could help people in similar situations so set her heart on becoming an emergency doctor.

Adeline qualified from medical school in 2005 and did her post graduate study in Emergency Medicine.

Her career led her to becoming a Medical Director which included establishing emergency services, teaching CPR to the community and helping to change the culture around ambulances showing they were not to be feared but to be seen as a trusted emergency necessity.

Adeline went on to help provide 2,000 ambulances and other essential projects to improve emergency health care in the region of Tamil Nadu in Southern India.

Though she enjoyed her work, she began to miss clinical practice and not many of the hospitals had emergency departments. She aspired to attain Membership and Fellowship from the Royal College of Emergency Medicine which landed her in Oxford in 2016.

On completion, she looked for her first consultant role and applied for a job at Blackpool which she chose because she thought she would be able to really make a change. That was in 2018.

As a consultant, she is one of the 12 most senior doctors within the department. She oversees the treatment of around 200 patients per day.

Last year, it was announced that Blackpool Teaching Hospitals NHS Foundation Trust was to receive close to £13m to develop an “Emergency Village’’ as part of a national fund to upgrade NHS Services in England, subject to successful approval of the full business case.

She said: “I am delighted to be a lead in the Emergency Village and Critical Care Development and that I am trusted to be part of something so important.

“The Emergency Village is not about the building, it is about creating a therapeutic environment for patients and staff. The main thing is about the patients’ journey and how quickly we identify their illness and treat them.”

But there is also a strong message Adeline wants to convey and that is about visitors and behaviour.

She said: “People who should not be in the Emergency Department come because they know they can. A and E does not stand for Anything and Everything. Their arrival just adds pressure to the department and means that someone who really needs emergency care isn’t getting it.

“We find a lot of people swear at us, even when they are sober. We understand that patients get stressed because of the environment, but it is unacceptable to behave in this way towards the people who are trying to help you. Would they speak to the police the same way? Would they like to be treated that way?

She says the staff are the Emergency Department’s greatest asset.

Adeline added: “Our staff are some of the friendliest in the region and we all support one another with words of appreciation. It is a tough job, but the staff always manage to smile and know that what they do on a daily basis makes a massive impact of people’s lives.

“What better job satisfaction can there be?”