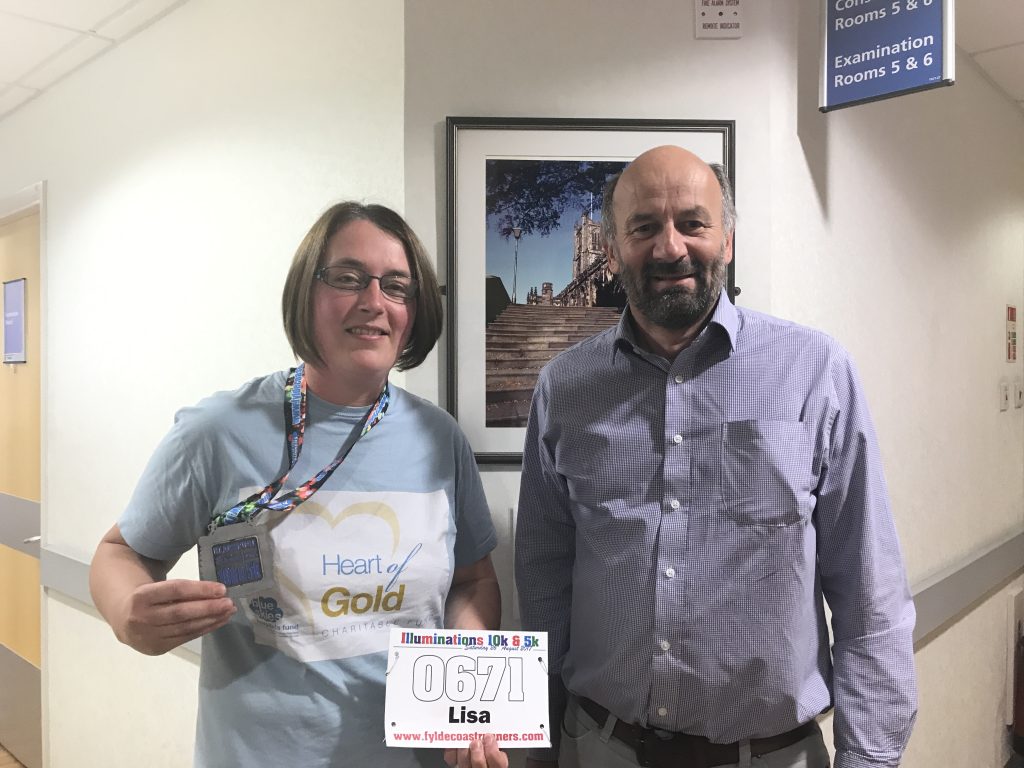 Lisa Huddleston and Mr Andrew Duncan who performed her surgery

A former patient who discovered she had a heart condition when she started running, has completed her first ever race in aid of the centre that treated her.

Lisa Huddleston from Wray, near Lancaster, ran a 5k race to raise money for the Blue Skies Hospitals Fund’s Heart of Gold Fund that supports the Lancashire Cardiac Centre, based at Blackpool Victoria Hospital.

Lisa was diagnosed with Anonmalous Left Coronary Artery arising from the Pulmonary Artery (ALCAPA) in 2016, a condition she didn’t realised she’d been born with. It was only when she started to run a couch to 5k programme in 2015 that she realised there was a problem.

Cardiothoracic surgeon Mr Andrew Duncan performed a double heart bypass and a repair to stop the deoxygenated blood feeding her heart, at the Cardiac Centre.

Following cardiac rehabilitation courses and having had a satisfactory cardiac treadmill result in May, Lisa felt able to begin the ‘Couch to 5K’ programme again, which she started in June.

Lisa said: “Friends came to run with me to encourage me, building up from 60 seconds of running to 30 minutes of continuous running over a nine week period.

“I found the running easier than I had expected, as now my heart was functioning as it should. It was still hard though.

“In July, Lisa signed up to do my first ever race, the Blackpool Illuminations 5K, held in August, having seen Alma Stewart, a Communications Officer at the Trust, in the Blue Skies magazine, Enhance, asking if anyone else wanted to do the run

“I asked my best friend from school to run it with me, she is a very good runner and she encouraged me all the way round.

“The emotion of the last few months came flooding out in tears as a neared the finish line, to the cheers of my parents, husband and children. I completed the run in 40 minutes 25 seconds and have been collecting sponsorship for ‘Heart of Gold Fund’.’’

Ann Hedley, Interim Head of Fundraising, said: “‘Lisa has done an amazing job of getting fit and running the 5k. What an achievement after such intense surgery.

“I think that she deserves a huge round of applause and I hope that everyone gets behind her to increase the £500+ that she has already raised.

“Well done Lisa and thank you for all your efforts.”

Mr Duncan said: “It was great to see Lisa do so well after her surgery and to run a 5k in a great time is a fantastic achievement.

“We very much appreciate the support Lisa has given to the Hearts of Gold charity, both from the run and from her previous fundraising events.”