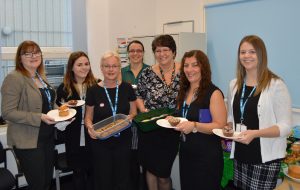 Sales were held across Trust on Friday, September 30, and hundreds of pounds were raised.

One of the coffee mornings was organised by members of staff from the ENT (Ear, Nose and Throat) Outpatients and Audiology departments at Blackpool Victoria Hospital in memory of their former colleague, staff nurse Dot Black.

Shirley Atkinson from ENT said funds raised would go to Macmillan but they had done it in honour of Dot who sadly passed away on March of this year. Shirley said Dot was a brilliant nurse who was greatly missed by her colleagues. Eve Pell, a housekeeper from ENT, sold the cakes in her own time. The ENT staff also made a special cake which was raffled off for Macmillan. 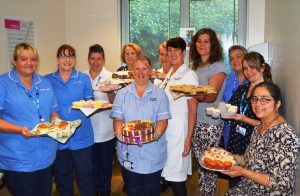 Staff from the ENT and Audiology departments

It was particularly poignant for HR manager, Jayne Taylor, and payroll team leader, Debbie Stanhope, who are both recovering from breast cancer.

Jayne said: “We were both diagnosed last year. We’ve both had support from Macmillan so it’s nice to give something back. We’re recovering well.”

Cake sales were also held at Slyne Road in Lancaster organised by occupational therapist Sally Edmondson and in the Haematology and Oncology Day Unit at Blackpool Victoria Hospital. 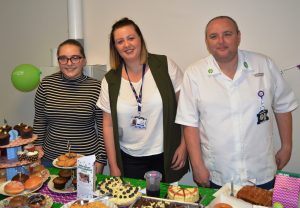