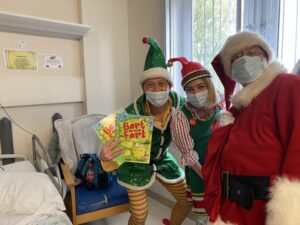 The cast of Elf visit BTH

Young patients at Blackpool Victoria Hospital had an early Christmas present when they met the cast of Elf the Musical this week.

Buddy, played by Tam Ryan and the kind hearted Jovie, (Kelly Benlacki) visited the children’s ward and outpatients department along with Santa to meet the children and give them some Elf presents and early Christmas cheer.

Elf the Musical, based on one of the most popular Christmas films of recent times, has been showing at Blackpool’s Winter Gardens this week with staff offered special discounted tickets offered as a thank you for all their hard work over recent times.
Play leader, Rosanne Norman, welcomed the cast members and thanked them for coming to the hospital.