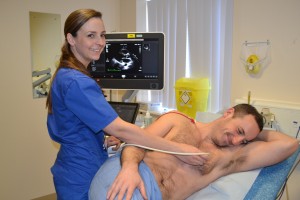 Heart patients will see a reduction in waiting times for certain cardiac tests thanks to a new piece of equipment at the Lancashire Cardiac Centre which has been bought thanks to charitable donations.

The centre, which is based at Blackpool Victoria Hospital, now boasts a brand new portable ultrasound machine which will measure the electronic activity of a patient’s heart.

It will specifically be used by doctors as part of a study of the electric impulses which travel through the cardiac tissue, known as electrophysiology (EP).

Echo Service Manager Maxine Lang explained: “This is an extended service we offer at the Lancashire Cardiac Centre which allows us to look at parts of the heart which would not be visible without this ultrasound.

“This machine has become particularly important due to changes in medication for our cardiac patients undergoing EP studies and who previously would have attended a Warfarin Clinic to check for any clotting.”

Before the new equipment was put in place, thanks to money from hospital charity Blue Skies Hospitals Fund, existing ultrasounds were borrowed between different departments, which was causing a delay.

Maxine said: “Unfortunately there were clashes, so we’d come in to do our testing and we’d find the machine we needed was somewhere else in the hospital. Now, thanks to Blue Skies, we are able to extend our service without impacting on another department.

“We are so grateful for the people who have made donations to the Lancashire Cardiac Centre through Blue Skies’ Heart of Gold Charitable Fund. Often people donate to our charity because of an experience they have had and we have been successful in treating them.

“It’s nice to be able to show everyone what a difference their donations have made for the patients who come through our department every single day.”