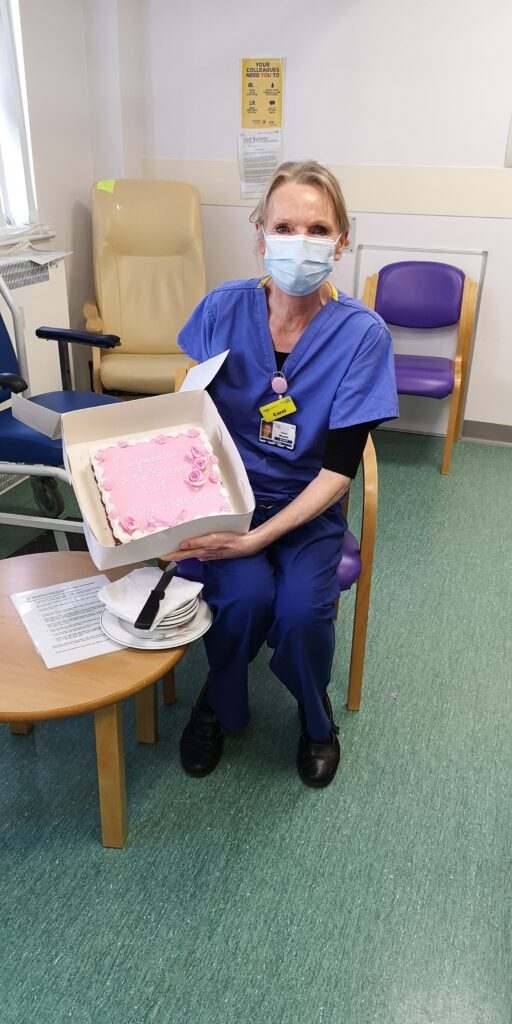 Carol Bennett, a staff nurse in the gastroenterology unit at Blackpool Victoria Hospital is retiring this week after a career which started way back in 1975.

Carol began her career as a 19-year-old enrol nurse and worked in medical and surgical before leaving the NHS to work in occupational health, a nursing home and pharmacy. She was persuaded to return to Blackpool Victoria, by nurse Robert Ward in 2002 and after completing her conversion and her diploma, and a spell on surgical she became a member of the gastroenterology team in 2008.

“It has been absolutely fabulous, I have loved it, it has been the best place to work, a marvellous team.,” Carol said this week as she said goodbye to her colleagues with a socially distanced gathering and celebration cake.

“My colleagues are brilliant, very close knit and support one another. I am not one for socialising out of hours, but inside the unit we are a like a family and I have really loved it.

“In retirement I plan to everything I want to do, but a bit more slowly.”

“We had a nice gathering with the consultants coming down and giving their respect to Carol, it shows what an amazing endoscopy nurse she has been,” she said. “Carol was my mentor when I started here ten years ago and she was just absolutely brilliant and probably the reason I am still here today because of all the support that she gave.

“She is very much loved by everybody. She has said she is ready to go, but you would never have known that until today, she has kept going and been there for the patients and she has got such compassion and such a caring nature. We will really miss her.”