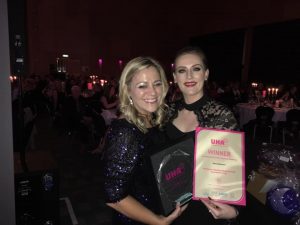 Alma receives her award from a representative of the Unsung Hero Awards.

Blackpool Teaching Hospitals is celebrating after winning a national award

Alma said: “I’m absolutely chuffed to bits to win the award, especially as it was for our #NHS70 campaign which included some of the Fylde coast’s most famous celebrities. I would like to thank Nigel Fort for nominating me – we had an amazing night. Well done to everyone who made the final.”

Following a number of nominations from the Trust submitted to the awards, the Facilities team and volunteer Jo Haythornthwaite were also shortlisted for their inspiring work.

The Facilities team, in conjunction with Unison, was nominated for its Cloak of Poppies campaign that saw 28,000 handmade poppies cover a 5:1 scale model of the Menin Gate which was housed in the hospital’s main entrance to celebrate the 100th anniversary of World War One.

Volunteer Jo Haythornthwaite was nominated for her tireless work to promote organ donation across the Fylde coast.

The Unsung Hero Awards offered attendees the unique opportunity to celebrate and be celebrated, no matter their pay band.