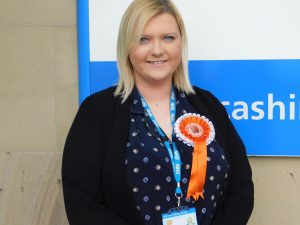 A YOUNG Blackpool woman who says she owes her life to experts at Blackpool Victoria Hospital says she could think of no better way of repaying them than getting a job there.

Leanne Humphreys, 24, had life-saving treatment at the hospital after being diagnosed with leukaemia last year.

She was so delighted with the care she received that once she recovered she looked to get a job at the hospital and has recently been appointed as a radiology booking clerk.

Leanne explained: “In April 2018 I was diagnosed with chronic myeloid leukaemia which came as a complete shock to me.

“This all stemmed from having shoulder pains a few months prior to my diagnosis. I thought I had just pulled a muscle.

“Then a few weeks later I had bad pains in my legs too which was similar to my shoulder pains. This gradually became worse to the point where I became unable to move or sit down.

“After phoning NHS 111, I was advised to come into hospital but I thought I was being overdramatic and worrying about nothing!

“Shortly after the phone call, I vomited a huge amount of blood and I knew something was wrong then.” 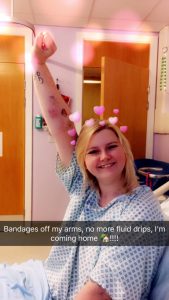 Leanne receiving news she has been discharged

Leanne attended A&E with her partner, Ashley, and she had tests completed to determine what was wrong with her.

After being told she may have a potential blood clot, she was moved to the Haematology Ward to complete more tests.

“This was unsuccessful and I felt really low at this point, feeling absolutely useless. But I was told blood tests would give them the results they needed.

“On Friday the 13th of April I was called in to the hospital and I was told that I had leukaemia and I was to start treatment urgently.

“The causes of this are unexplained and this is why it has been such a huge shock. Especially being the age I am!

“I have been on my treatment for just over a year and this means I have to take a chemotherapy tablet each day. Leukaemia is incurable but I am controlling it with the medication.

“The side effects of this are horrendous. I have experienced hair loss, sickness, bone pain and this is every day. 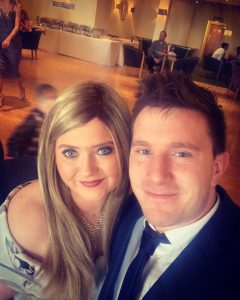 Leanne with her partner Ashley

“I had been told the blood tests are what provided the results of the diagnosis and they saved my life.

“I want to be cancer free, but I know this just won’t be possible so I am being positive and upbeat about moving forward with my journey.

“During my treatment, I developed chronic sepsis and I was in hospital for a week. Again, the medics have saved my life and this is why I want to give something back to Blackpool Victoria Hospital.

“I want to raise awareness of leukaemia and share my journey with people. I have started writing blogs and I also support Bloodwise with their campaigns.

“I am so grateful to all my family and friends for their support through my journey especially my partner Ashley, my mum, brother and niece, Lottie.