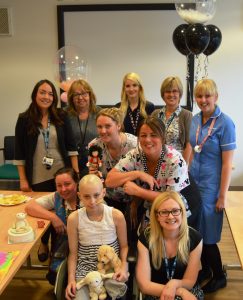 A young cancer patient’s desperate plea for help to find her lost toy lamb was answered by hospital staff.

Eleven-year-old Alison Hayden put up a poster at Blackpool Victoria Hospital saying: “Help me find my lamb ‘Minty’. Reward: 25p and a hug because that’s all I have.”

She’d had Minty since she was born and took the toy lamb everywhere she went.

Staff sprang into action and an epic search for Minty was carried out. Minty eventually turned up in an industrial laundry, much to everyone’s relief.

One member of staff, Becci Addey, documented Minty’s journey around the hospital with words and pictures and had it made into a book for Alison to keep.

Becci, who works for the Trust’s Patient Experience Team and Alma Stewart-Gee and Ingrid Kent from the Communications Team, also organised a tea party for Alison and presented her with gifts from well-wishers on July 15. 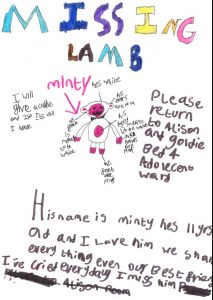 Alison, who is a pupil at Haweside Academy, was delighted to be given a Tracy Beaker doll from Nick Sharratt – the illustrator of the much loved children’s books by Jacqueline Wilson. Attached to the doll was a little book filled with personal messages and illustrations by Nick.

Nicola Dobson of the Crazy Cake Company in Lancaster made a cute model of Minty to sit on top of Alison’s cake and ‘Build A Bear’ of Blackpool gave Alison a voucher. Balloon Designs of Lytham created a lovely personalised feather-filled balloon for Alison and Blackpool Zoo gave the family a day out. Blackpool Balloon Company also made a stunning display of balloons with a special ‘Welcome Home’ message for Alison and Minty.

Alison’s dad Richard said: “The thing with Minty has been completely unbelievable.

“Alison put the poster on the wall and when people found out why she was in hospital it inspired them.

“The lamb means the world to her. It made a big difference to Alison to get Minty back.

“When they were reunited Alison just cried. It was devastating to lose Minty and we though he might be gone forever. 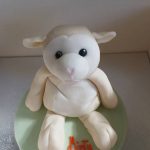 The model of Minty made by Nic Dobson

“It was such a nice surprise to have him back.”

In June of 2015 Alison noticed a lump on her leg which was diagnosed as bone cancer. Sadly, in September Alison’s left leg had to be amputated.

Some of Alison’s treatment, including chemotherapy, has been carried out at Manchester Children’s Hospital. Alison is also participating in clinical trials within the Trust which will help patients in the future. 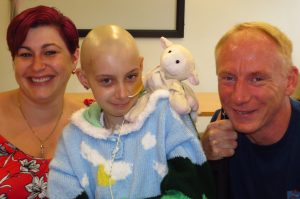 “She is very smart and astute. She is great fun and before this happened she was the most joyful, happy-go-lucky girl. She has never let it get her down.

“Staff at Blackpool Victoria Hospital have been great with her.

“Alison always says going to Blackpool Victoria Hospital is like going on holiday after her chemotherapy.

“She really likes the ward and the staff. They respond well to her and are very warm with her.

“Alison was born prematurely – six weeks early. She survived and got through it. It has never been easy for her. She has had a lot of health difficulties throughout her life.

“It’s unbelievable the amount of people who have done something for Alison.

“She is absolutely made up with her gifts.

“We can’t express how grateful we are.”

Alison said she enjoyed the party: “It was really good. It was a big surprise.”

Alma explained: “When I saw Alison’s poster I thought we’ve got to do something. It was heart-breaking.

“It’s nice that staff at the hospital have worked together to give something back.

“It’s really rewarding to be able to make nice memories for Alison and her family.

“People have been very generous with their presents for Alison. It was wonderful to see the smile on her face when she was opening her gifts.” 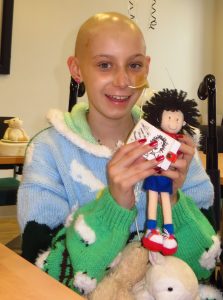 Alison with the Tracy Beaker doll from Nick Sharratt

Becci added: “Alison’s dad told me she likes a bit of silliness so I thought the book might make her smile.

“It’s a bit of fun. It’s also something for her to keep.

“There was a big search for Minty – a lot of nurses on the Children’s Ward were looking for him. He was missing for a few days so I sent Alison a postcard saying he was on his holidays. That’s what gave me the idea for the book.

“I took some photos of him around the hospital and took him back to Alison later that day.

“When the book was ready I gave it to Alison and she loved it.”