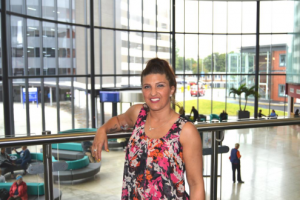 A young mum who has been living with cancer for nearly three years is backing a special event for people affected by the disease.

Sarah Colledge, 37, from Blackpool, says the ‘Cancer Listening Event’ on September 22 in Blackpool will give Fylde coast residents a chance to shape the future of services.

The event is being organised by Blackpool Teaching Hospitals NHS Foundation Trust and Macmillan Cancer Support.

Sarah, a hugely positive person who has a daughter called Eve, 11, and a son called William, 14, believes patients and carers need to let people in authority know what they need. She is even going to the Houses of Parliament on September 9 to speak to MPs about the support that is available for cancer patients in the North West.

Sarah’s partner and carer, Kenny Bullock, is also backing the event as it will give carers a chance to share their experiences.  Organisers want to hear from as many people as possible to help make a difference to support services.

Sarah said when she first became ill in 2012 there were various issues with the care she received. It took nearly a year for her to get a clear diagnosis and she felt as if she wasn’t being listened to by her GP.

She said: “It felt as if nobody wanted to know at first. I was banging my head against a brick wall. Patients should always be taken seriously. Doctors need to think: ‘If that was my mother or daughter, what would I do?’ I think outcomes for patients would be very different then.”

However, Sarah persisted and was devastated to be told that she needed extensive surgery for a large cancerous mass in her abdomen which had spread to various parts of her body.

She says she is now receiving excellent care from a new GP, medics in Blackpool and a surgeon in Preston, but feels the outcome might have been different if she had been listened to much earlier.

The Trust’s Patient Advice and Liaison Service (PALS) was particularly helpful to Sarah and she advises any patient who is having difficulties to contact PALS.

Sarah said: “They sorted it out within a few days. They were really good. I got referred to a brilliant consultant and it all took off from there.

“I had an operation and reconstructive surgery in 2013. It was major surgery. If PALS had not sorted it out I don’t think I would be here now.”

“After about six months I was snowboarding again.”

However, more recently the cancer has returned and further surgery is not possible.

Sarah said: “It is too much of a risk to have further surgery but I’m a believer in taking vitamins and holistic treatments and a recent scan showed that the cancer had regressed.

“My prognosis is not good but I just try to forget about it and carry on. I set myself goals and look forward to things.”

Sarah, who recently made a speech and sounded the air horn for the start of Blackpool’s Race for Life, says attending events such as the one being organised by the Trust and Macmillan can make a difference.

She added: “It’s hugely important that you’re listened to as a patient.”

Deborah Loftus, Cancer Lead for the Trust, said: “We are trying to reach as many cancer patients and carers as possible with our listening event.

“It will be an ‘open space event’ so everyone will have a chance to speak. There will be one main question and it will be facilitated by Macmillan.

“We’re hoping to develop themes that we can work on. We haven’t got any set ideas – we want it to come from the patients and carers.

“We would like patients and carers to be involved in developing our new five year strategy with the Trust, the Clinical Commissioning Groups (CCGs), local councils and social services.

“What we’d really like is to hear from a mixture of cancer patients and carers of both sexes and all ages.”

There are plans to hold two more events over the year to follow up the outcomes from the first listening event. Depending on the feedback received from patients, there will be continued refinement and improvement of services.

If you would like to attend the event in Blackpool (venue to be confirmed), which will run from 11.30am to 4.15pm, please contact telephone Kimberley Orrell on 01253 957144 or email Kimberley.orrell@bfwhospitals.nhs.uk

Application forms are also available from the Patient Advisory Liaison Service (PALS) on 01253 955588.