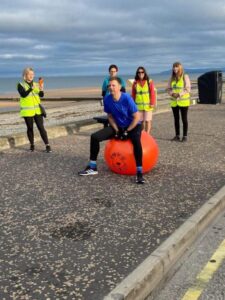 A member of staff at BTH bounced his way to a unique world record recently.

David Kay spent a gruelling 17 hours making his way from Fleetwood to Lytham on a space hopper, all in the name of charity. And as well as raising vital funds David wrote his way into the Guinness Book of World Records with his efforts.

David used 10 space hoppers over the 14km course which included approximately 90,000 bounces along the promenade this week. His unusual fundraiser attracted attention from the local and regional media with appearances on TV and radio which all helped his pass his goal of raising £1,000 by some way.

He said: “It was really tiring I have to admit.

“I set off from Rossall about 7.45am and managed to hop along the Fylde coast to St Annes pier at 1am on Tuesday.

“It was hard work and I am aching in places I never imaged.

“I had six blow outs and two slow punctures so was only left with two hoppers at one time and we were panicking a bit after four blow outs but we managed to make the hoppers we had last.

“The support I had really helped me over the finishing line.

“There were times I wondered why I was doing this. At Central Pier I thought I couldn’t go on and then again at the Sandcastle but the staff there were brilliant.

“About 11pm I was on Clifton Drive and thought I was going to be sick but I was only about two miles away and said I just needed to finish it off.

David wanted to pass on his thanks to all his helpers and support colleagues who got him through the event.

He has already raised £10,000 for Trinity Hospice during lockdown, taking his amazing feat to in the region of £15,000 this year.

If you would like to add to David’s fundraising efforts please see his Just Giving page here.