As Blackpool Teaching Hospitals see continuing unprecedented pressures across all of our services, Dr Sam Guest, Consultant in Emergency Medicine, has explained some of the difficult choices which have been made to deal with demand. 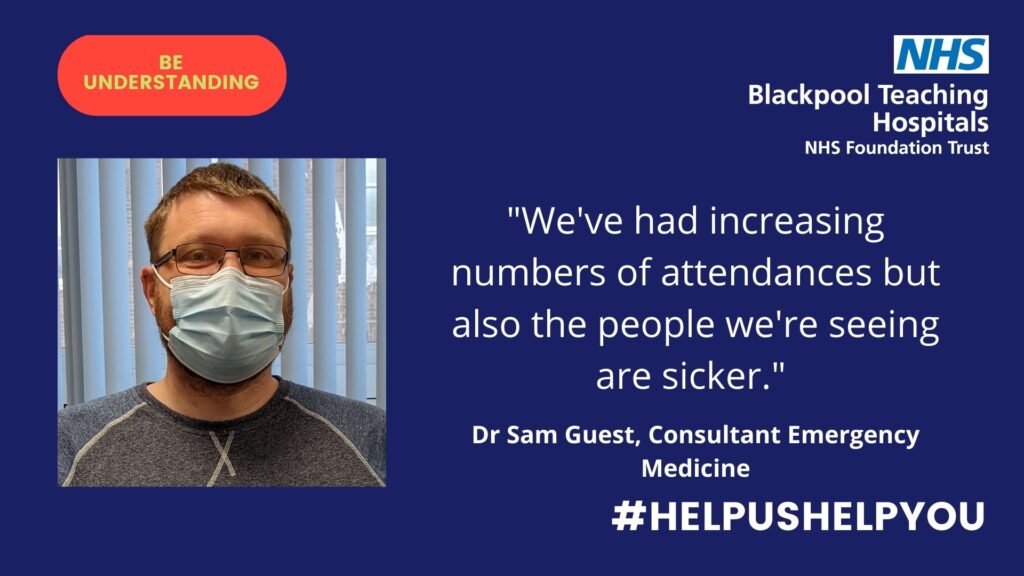 “I think winter has started early for us this year, we’ve had increasing numbers of attendances but also the people we’re seeing are sicker,” Dr Guest said as A&E once again sees extraordinary levels of patients.

“I think we can see right across the health economy, from primary care all the way through to the inpatient wards and then into social care afterwards that the demand is increasing and our GP colleagues are seeing increasing numbers of people that are trying to access their services.

“From discussions with our partners we can see that a lot of what they’re seeing is increasingly complex and this is then putting increasing pressure on to the ambulance service. They’re seeing increasing numbers of calls and then they’re having problems getting to some of those in the times that they’re expected to because when they come up to the emergency department, because we’re busy and we’re crowded, and we’re not necessarily able to offload the ambulances within the times that we would like to.”

Some of those issues have been clearly visible, with the unfortunate sight of ambulances having to wait before offloading patients into the Emergency Department at Blackpool Victoria. But Dr Guest underlines that patient safety is always the key consideration when decisions are made.

He said: “We’re weighing up the risks of crowding the front door with patients on trolleys, that we can’t see and we don’t have staff to look after, compared to the risks of leaving them on ambulances or leaving them with the ambulance crews, which then obviously adds to the risk for patients in the community because if the ambulances are here they can’t be going to patients in the community and which then increases the risk to those patients if they’re delayed in getting the care that they need.”

If your condition is not an emergency please do not visit A&E at Blackpool Victoria Hospital. Please call NHS 111 or visit the website for more advice.