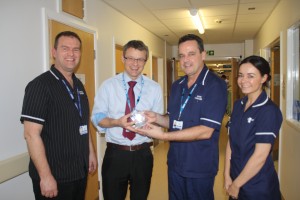 The glittering event at the De Vere Herons Reach was attended by 400 guests and raised £15,010  to help the Blackpool based carers’ charity convert a former NHS-owned property on Newton Drive into a carers’ centre.

It also celebrated unpaid carers, young and old, in the community and those who support them.

Prof Becker, Pro Vice Chancellor of Birmingham University, and a key adviser to the national Carers Trust which is currently assessing the impact of the Care Act, almost a year on, presented Hospital Team of the Year to Wendy Swift, deputy chief executive of Blackpool Teaching Hospitals NHS Foundation Trust,  who accepted the award on behalf of Ward 11.

Ged Mills, of Radio Wave, who hosted the event, read out the citation for ward staff from CTFC chief executive Michelle Smith:  “Ward 11 has a real understanding of our organisation and regularly refer carers to our service.

Hospital staff appreciate the work we do, supporting the carers of patients on their ward. This in turn frees up their time to concentrate on patients’ care.

They recognise the importance of supporting the whole family, which enables a smoother discharge when their loved one is due to leave hospital.”

Wendy responded: “It’s the nurses and staff on the ward who have worked very hard to support all carers wherever they are.”

The Blackpool-based carers charity, now 11 years old, has a specialist carers’ support team working at Victoria Hospital in tandem with staff.  Last year ward staff referred a 95 year old lady – who had been admitted to hospital in her own right  – to the charity after realising she was caring for her husband, who has dementia, at home.

Mrs Eunice Nicholls now not only has the support of the carers’ centre and has made new friends but supports them herself – acting as a mentor to younger carers.

Last year she won The Gazette Best of Health carer of the year award. Mrs Nicholls,  a veteran of the Women’s Auxiliary Territorial Service,  in which the Queen also served, later revealed that if she felt “lost or lonely” at night she would mentally go over every moment of a trip out with the charity to a vintage tea room in the countryside and send herself to sleep “smiling.”