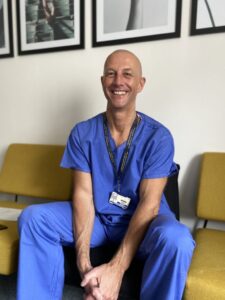 A number of Corona Heroes from Blackpool Teaching Hospitals NHS Foundation Trust will be celebrated at this year’s Blackpool Illuminations.

Ten staff members were chosen from hundreds of nominations across the UK to be part of a special display to celebrate the unstinting work of 50 NHS, key workers and other outstanding individuals during the coronavirus pandemic, with the famous Golden Mile featuring a display of hearts and rainbows.

One of those, Trust Consultant Dr Jason Cupitt, is one of six people given the honour of switching on the illuminations at a special virtual switch-on event to be staged in association with MTV on the night of Friday, September 4.

Jason’s nominator wrote: “Jason worked every day and most nights at the peak of the pandemic, spending only a few hours away from the hospital over several months. His constant presence provided encouragement and reassurance to staff and patients in the struggle against COVID-19.’’

Jason will be joined in a closed set in the Tower Ballroom by the show hosts, Ashley and Jordan Banjo, Blackpool-born singer-songwriter Rae Morris, and the Illuminations’ creative curator Laurence Llewelyn-Bowen.

The switch-on moment in the ballroom will be part of an hour-long streamed event that will be freely accessible on VisitBlackpool and MTV channels. It will feature at-home performances by Melanie C, Becky Hill, Fleur East, Tom Grennan, Joel Corry, as well as a performance by Diversity.

Other staff who will have their illuminated images in the 2020 display are:

Trust Chief Executive, Kevin McGee, said: “We are delighted to see so many members of our staff honoured for their work in such a way.

“The way our staff and key workers everywhere have reacted to the pandemic has been absolutely amazing and I am proud of every member of the staff at the Trust for the work they have done.’’

Laurence Llewelyn-Bowen, who helped select the winning nominations for the Corona Heroes section in the Illuminations said: “We have all been truly humbled by the volume and nature of the nominations that we received.

“Every single nomination has illustrated the dedication and self-sacrifice that has been made by so many individuals during this pandemic, whether they be NHS staff, care workers, delivery drivers, fund-raisers or others who have put their own lives on hold to support the sick and the vulnerable.

“I only wish that we could include all of the nominations within the Illuminations display because each and every one deserves their place in the limelight.”

It has already been announced that the Illuminations will be extended by two months, starting on September 4 and ending on Sunday 3 January, 2021. It will be the first time the Illuminations have shone over Christmas and New Year.