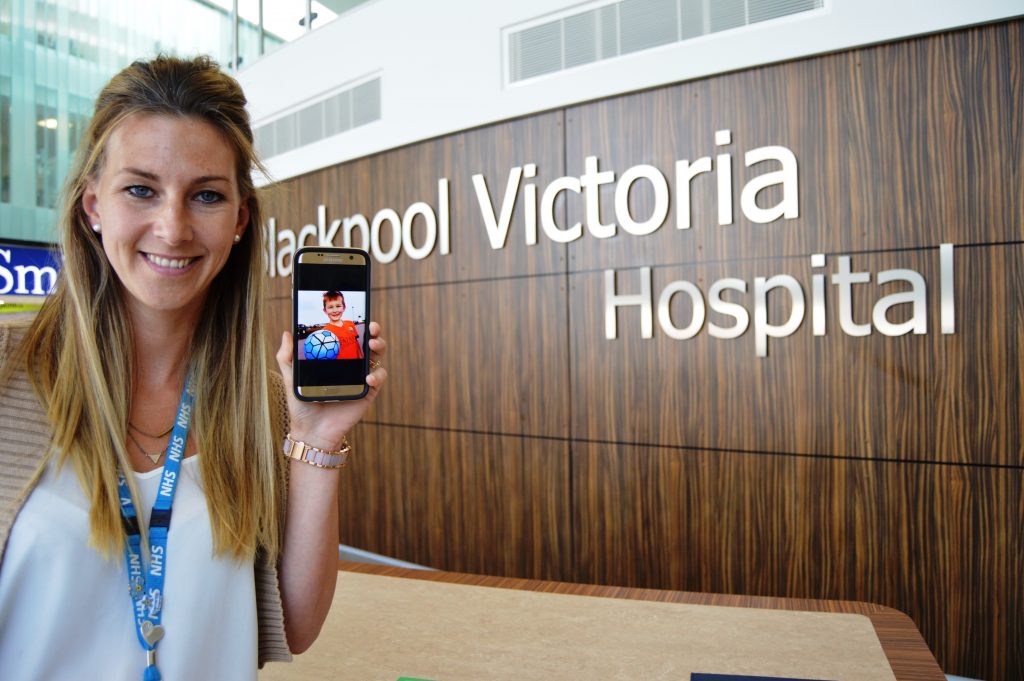 Emma Hannan and the winning picture of son Bayley, chosen as a player escort for England v Wales in Euro 16

A Blackpool Victoria nurse is celebrating after her son won a competition to be a mascot at the European 2016 Championships in France.

Emma Hannan, a Clinical Improvement Nurse who lives in Kirkham, entered her son Bayley, 6, into a McDonald’s competition for the chance to be a player escort at the competition.

To be in with a chance of winning, entrants had to submit a photograph to encapsulate how much they loved football.

Emma said: “I took a picture of Bayley with a football on Lytham front with the windmill in the background and thought I’d send it in.”

She was at work when a call came through saying she had won and initially thought it was a scam.

Emma continued: “ I went along with the phone call thinking it was some kind of rogue company, but when the official email and letter came through, I was super excited as we never win anything!”

Emma checked with Bayley’s school, The Willows Catholic School in Kirkham, to see if he would be able to take the time off school before telling him he had won: “He was really excited and nervous, but as it’s getting closer, he is getting more and more excited,” she said.

Bayley, who plays for Kirkham Juniors, will be the player escort at the England v Wales match next Thursday afternoon.

As part of the prize, he and an adult will have an all expenses three day break to Lille with a programme of entertainment thrown in.

Emma said: “I was going to go with Bayley at first, but as it is his dad’s birthday on the 18th, I swapped my name for his. He thinks I’m a great wife! I will be watching from Bradley’s Bar at AFC Fylde with my family instead.”

Following Bayley’s walk on role, he and dad will then watch the game in the stadium. Bayley’s favourite player is Gareth Bale, but he is happy to be walking out with any player – he will only find out who on the day.

Bayley, who has been playing football since he was three, comes from a long line of Blackpool supporters on his mum’s side and PNE supports on his dad’s.

He is one of nine children from the UK who will be mascots at UEFA Euro 16.