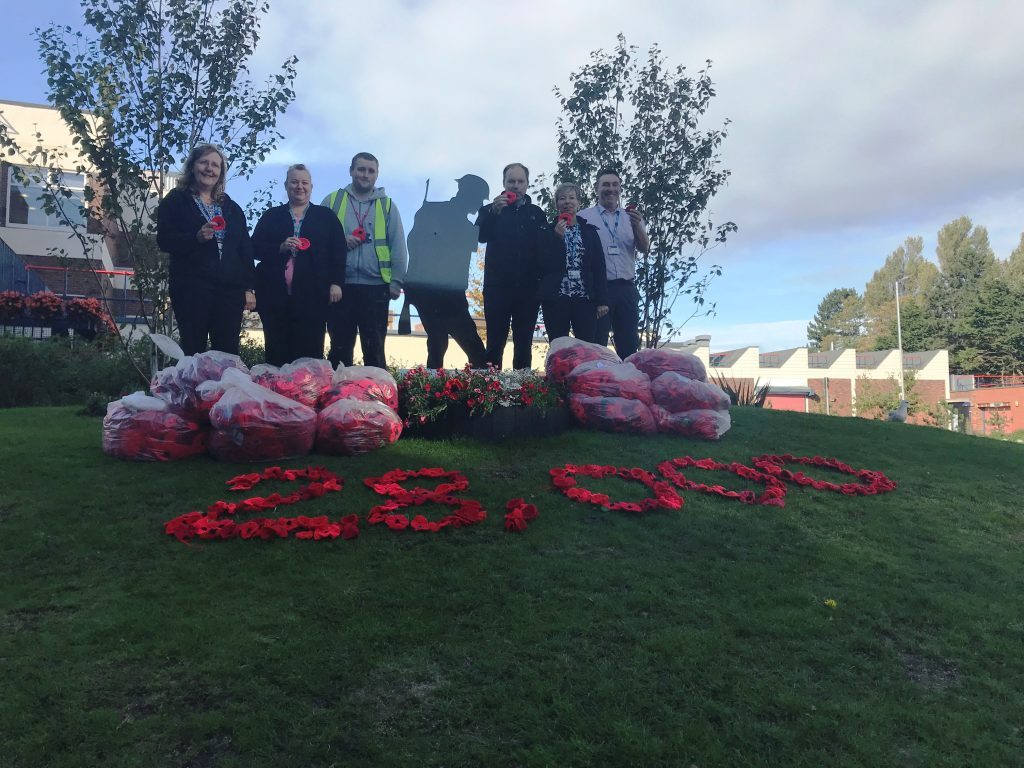 28,000 knitted and crocheted poppies have been donated over the year-long ‘#TheGreatBTHKnit’ campaign by volunteers from around the Fylde coast and from as far away as Canada.

The poppies will feature in an 18 foot high monument, ‘The Poppy Memorial’ which will be unveiled in the main entrance of Blackpool Victoria Hospital on October 26.

Leading the campaign is Associate Director of Facilities, Nigel Fort. He said: “As Blackpool was a major medical convalescence town in World War 1, we wanted to remember all those killed and injured not only in the World Wars, but in all armed conflict over the past 100 years.

“Our hospitals and staff still play a crucial role in Blackpool and the Fylde coast, with many of our staff also being armed forces Reservists. So many local people have been touched by armed conflict somewhere in their family history and that’s why I think our communities have come together to back the campaign.”

Preparations for the monument will get underway from October 10. The structure has taken months of work with all materials and labour donated by local companies JE Harrison, Sign Express, PSK and Sons, Technical Electrical, SF Taylor, Express Linen Services and Blackpool Glass.

Nigel said: “Local businesses have been incredibly generous and the campaign has not cost the NHS one single penny. We have had so much support, not only from the knitting groups, but from local historians, Lancashire County Council, Fulwood Barracks and of course our Trust staff and volunteers. We even have beautiful artwork that has been sent to us from each class of Layton Primary School, which we will be displaying as part of our events. The campaign is spanning all generations.”

The ‘Poppy Memorial’ will be open for two weeks, ending in a special Remembrance Service which will be held on November 9.

The structure will house WW1 artifacts, historic events and personal dedications and memories from the local community.

Nigel added: “We would love to feature memories of what life was like around the local area during the wars. We would also like to display photos and descriptions of people’s loved ones who were killed or injured in any armed conflict.

“Through our regular Knit and Natter sessions, the group have made new friends and have felt part of something special. All our poppy contributors are invited to special thank you events. We hope to continue these meetings for a new project that’s in the pipeline.

“The support we have had has been amazing. We can’t wait to reveal this ground-breaking structure which is not only a monument to our armed forces, but also to the support and dedication of our local community both then and now.”

The poppies will also feature in displays within the Outpatients department of Blackpool Victoria Hospital, Clifton Hospital and surplus poppies will be on sale to raise money for the Royal British Legion.

Personal photographs and descriptions of armed forces personnel to be remembered inside the Memorial can be sent to Nigel.Fort@nhs.net.

For further information of the events, visit www.bfwh.nhs.uk.