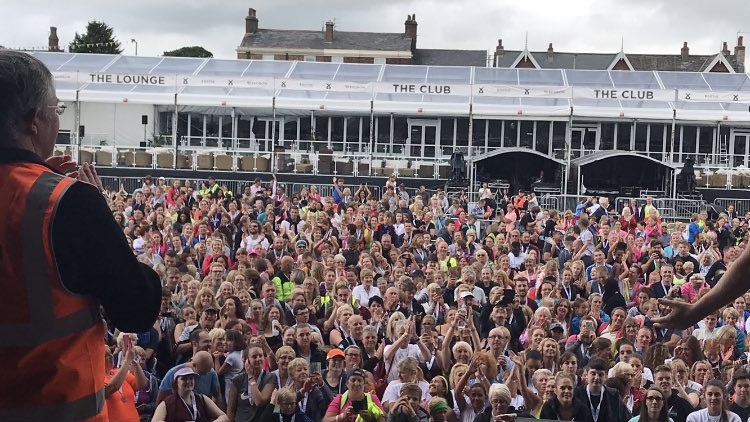 1,696 people turned out to break the world record for the most people performing jumping jacks simultaneously which was achieved by NHS Fitter Fylde Coast with Daniel Whiston in Lytham on 21 July 2018 at Lytham Festival’s main proms arena on Saturday.

The record was broken following an attempt to break the record for the most people exercising to a fitness video in a single location, which unfortunately fell short.

The records were attempted as part of the Fitter Fylde Coast campaign, launched to raise awareness of the importance of living a healthy lifestyle in response to growing childhood obesity rates in the area. It also celebrated the 70th birthday of the NHS.

Three-times Dancing on Ice champion and fitness instructor Daniel led the world record attempts from the main stage, having choreographed and filmed the exercise routine, dubbed the ‘Whiston Wave’.

Daniel said: “I’m absolutely delighted we have broken a Guinness World Record while encouraging fitness and celebrating the work of the NHS.

“It was fantastic to see so many children and families taking part and the best thing is they can now tell everyone they are official Guinness World Record holders.

“Exercise is so important but it is good to remind people how much fun we can have while doing it. Hopefully people will be inspired by the enjoyment they got from today into doing even more to keep fit.”

Dr Tony Naughton, a Thornton GP who has spearheaded the event on behalf of the Fylde Coast NHS, said: “Across the country, 40 per cent of children start secondary school overweight and 20 per cent are obese. What we are really keen to do is promote a healthier lifestyle across the Fylde Coast so people can start looking after themselves and their loved ones.

“If today’s event went just a small way to creating a Fitter Fylde Coast then we can all be very proud of what we have achieved.

“I would like to thank all the organisations, businesses and partners that have supported this project and helped make it such a success. These include Fylde Council, AFC Fylde Community Foundation, Fylde Coast YMCA, Jewson and Healthier Fleetwood.”