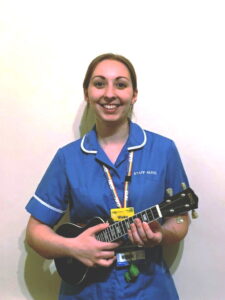 Nurse Vicky Greaves with her ukelele

Emergency paediatric nurse, Victoria Greaves, 27, from Blackpool, takes to the social media platform to sing songs and play the ukulele.

Vicky said: “I just want to spread some joy. I think that’s more important than ever right now. Music makes me happy and I know people need a lot of happy at the moment.”

Vicky has worked for Blackpool Teaching Hospitals NHS Foundation Trust since September 2019 and has a degree in Music Production. However, during her first job for a car park company, she realised she wanted to do something more meaningful.

She said: “In this role I realised I could really help people. At the time, I worked with a girl who knew a teenage boy that was dying of cancer. She would talk to me about the situation and I had an overwhelming feeling that although I knew no one could save him, I wanted to do something to help children like him.

“When I was a child my sister who is 18 months older than me had cancer and I always admired the doctors and nurses that helped her get through that. So a couple of years after graduating in Music Production, I did some research, applied for the Children’s Nursing course at UCLan and got in!

“I absolutely love nursing and although it was a huge life changing decision I am so happy I took the leap.”

Vicky has been singing in choirs since she was six years-old. Her father bought her a ukulele for Christmas in 2010 and she also plays piano and cornet.

She also has lots of experience including performances at Blackpool Tower, on a boat in the Lake District, outside the Eiffel Tower in Paris, contributing backing vocals to a gig in Birmingham and taking part in recording Sand Aid with Bobby Ball and Black Lace.

Her singing has also come in handy on the ward. She said: “Once when I was a student, I had a young patient who was terrified of having a cannula so I distracted her by singing Let It Go with her. The doctors, nurses and her parents all joined in too. It was a really special moment.”

Vicky added: “I was overwhelmed with the response and I get messages from people saying it makes them happy to see my videos.

“I just really enjoy music and always have. I’m always trying to spread joy and if my singing/playing does that then that’s great!”