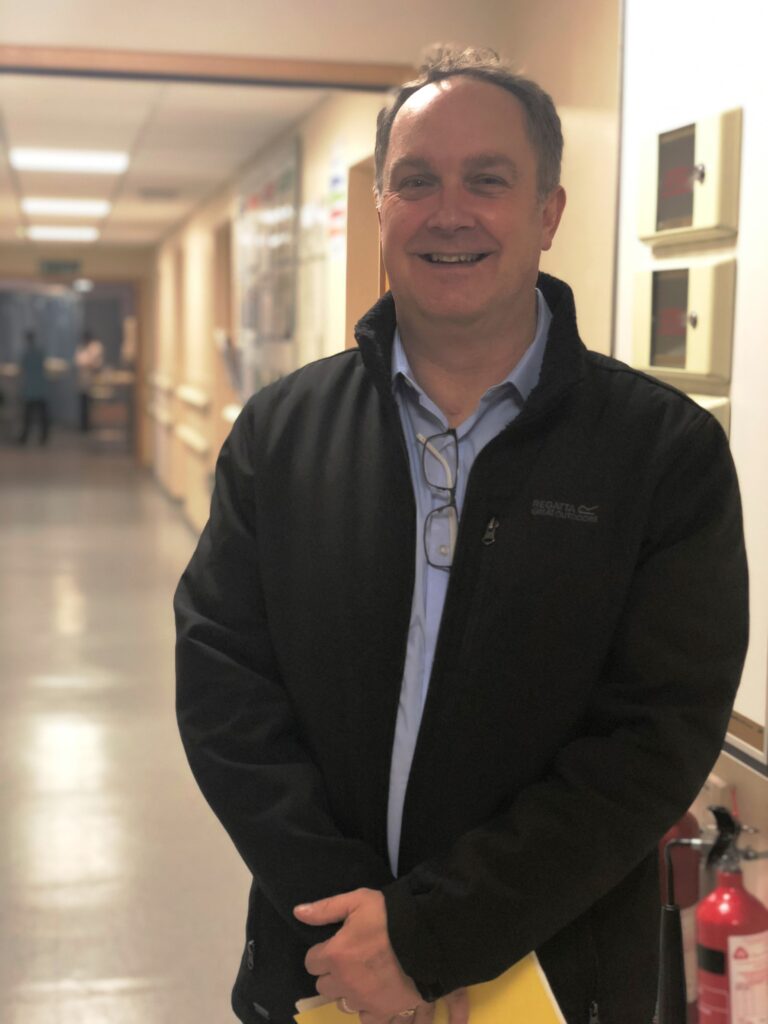 A patient who was critically ill in Blackpool Victoria Hospital has been describing his ordeal and determination to make a full recovery.

The father of three ended up being put into an induced coma in February after dialling 111 when he was concerned about breathing difficulties that ended up being pneumonia that left him weak and unable to walk.

He said: “My son and wife were already in bed with flu which I ultimately caught. As they got better, I seemed to get worse to the point where I thought ‘this is really serious’.

“The 111 service sent an ambulance and by this time I couldn’t even walk. I was seen very quickly in the Emergency Department where a Critical Care Consultant stayed with me and told me they may have to put me to sleep. I woke up two weeks later.”

When Eddie started to come around from his coma, that’s when the real trauma set in.

He said: “I became aware of the tubes and wires coming out of me and was fighting for every breath. It was the scariest thing in my entire life.

“I had hallucinations where it seemed that I was being killed and nothing made sense – it was a very frightening time. I don’t think people realise what you go through in this situation and there is nothing you can do to stop it.”

Eddie started his recovery having lost almost five stone and being so weak he was unable to do most things. But he was determined to improve.

He said: “It has taken some time to process what I have been through, but I am getting support with that. It was like being an 80 year-old – even my hair fell out at one point.

“Specialist Physiotherapist Nicky Williams has been really supportive and pushed me quite hard at times. But she has made sure that I have had the therapy I needed to be stronger and to be able to manage at home. I was so desperate to get out of hospital.”

Eddie spent a total of 52 days in hospital following a couple of setbacks in his recovery. He continued to get stronger and now follows an exercise programme that includes using weights and swimming.

Eddie said: “I have definitely built up my strength but my stamina still needs work. I still get exhausted and need a two and a half hour sleep in the daytime.

“What happened to me has definitely changed my life and priorities. I want to give back and hope to set up a blog and support group for others that have been in a similar situation.

“The care I received was absolutely brilliant – they saved my life. Staff even supported my wife Sally through my stay with hugs and kind words when they were needed.

“I was lucky. I had a lot of support from my family. I know not everyone has that and that makes me even more determined to make a difference and help others who find themselves in need of critical care.”

Eddie has just returned to his IT Consultant job on a phased and flexible return basis.