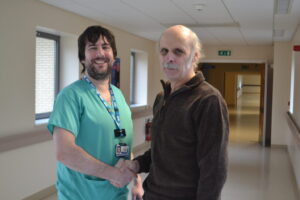 A BLACKPOOL man who almost died after suffering a cardiac arrest while out running last year met up with the NHS hero who saved his life.

In November last year Colin Dyczka, 63, was out with his running partner, Lynne Wagstaff, when he thought he had a stitch from exercise.

But it turned out to be something far more sinister than he realised as he was having a cardiac arrest and collapsed.

Thankfully for Colin he was seen by Steven Power, who works in the Lancashire Cardiac Centre at Blackpool Victoria Hospital, who was driving past with his son.

Steven, a Surgical Care Practitioner, wasted no time in getting out of the car to perform CPR and save Colin’s life.

The two met for a catch up at Blackpool Victoria Hospital this week to talk about the events that unfolded.

Colin said: “I really don’t think I would be here without him. My wife, Beverly and I are so grateful to everyone for their amazing care.

“I had a cardiac arrest and all I remember was going short of breath then I collapsed, was given CPR and rushed into Blackpool Victoria Hospital by the paramedics. I remember waking up in hospital which was very scary.

“I’m also very grateful to my running partner Lynne for being there with me and helping to put me in the recovery position until help arrived.

“I have been running since the 80s and each year have ran the Blackpool 10k. My running partner, Lynn and I run twice a week together and have done for some years.

“The attack came out of the blue and I had no health conditions prior to this. I have always been healthy. I’ve never smoked so it was a huge shock to us all.

“When I got to the hospital I underwent a heart triple bypass and ended up having four operations in total and staying in hospital for five weeks.

“Two weeks after my first operation I had my pace wires removed and this caused severe bleeding and further problems, causing me to spend more time recovering in intensive care and then on a ward.

“I am still struggling to breath and walk and I will take time to recover and build up my fitness and health.

“I have lost strength and weight however I am determined to complete the Blackpool 10k as I always do, whether I run or walk the race.

“All I can say is a huge thank you to the teams who have cared for me. The paramedics, staff on Ward 38, the theatres teams, intensive care staff and a huge thank you must go to Steve, for his quick actions.”

Steve said: “As I work in the Cardiac Centre, I had the pleasure of being there as part of the theatre team who performed the surgery on Colin so I saw him twice.

“He has recovered really well and I am so pleased to see him doing well.

“In cardiac arrests, only six per cent of people survive outside hospital so chest compressions are vital in survival.

“They really are the difference between saving a life and early intervention is key.

“It’s not available in a lot of UK cardiac centres but we endeavour to offer it to all our patients.

“As opposed to the traditional vein harvesting techniques where a cut from ankle to groin is made and the vein is removed, we make a small 2cm incision just below the knee.

“It has drastically reduced post- operative wound infection, pain and bleeding and people can get back on their feet quicker after surgery, which is perfect for people like Colin who are so active.”