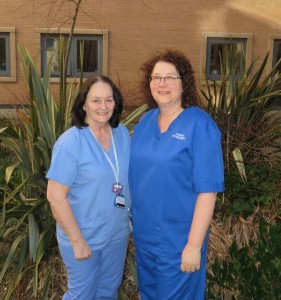 Maxine Lang and Cath Tomlinson are planning to visit Cape Town in South Africa as part of the Echo in Africa humanitarian project.

They will head to Cape Town in October with other volunteers from the project and will spend two weeks working with children of all ages.

Maxine, the Trust’s Echocardiography Service Manager and Cath, a Sonographer for the Trust, have both been to Africa with the project on previous occasions.

Maxine, who is from Over Wyre, said: “The project is for kids from the Townships who may have rheumatic heart disease.

“It is very common in the area – it’s not something you tend to see very often in England these days as living conditions have improved.

“The children live in shacks that don’t necessarily have running water or electricity.

“It’s the third year that the project has been running and it’s my second time of going out there.

“Rheumatic heart disease is something we would have seen more in the 1950s and 1960s. When we see it now it’s usually in older people.

“Improved standards of living have resulted in a reduction of the incidence of this kind of disease.

“In Africa people are still presenting with it. It affects children of all ages.

“It can lead to damage of the valves of the heart and it usually isn’t picked up until they get a bit older. If you know they are at risk you can do something about it sooner.

“In the first year we saw 2,000 children. The hospital follows them up afterwards so they aren’t just left untreated.

“The children we will be scanning this time will be mainly secondary school children.” 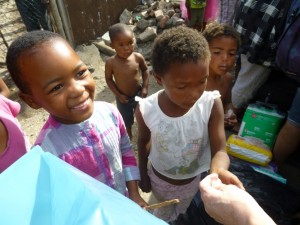 Children benefit from the work of the Echo in Africa volunteers

Echo in Africa is run in conjunction with the British Society of Echocardiography.

Maxine had been in Africa several times and when she heard about the project she thought it was a great opportunity to learn more about rheumatic heart disease.

She said: “The children are lovely – they really are super.

“We help raise money to get them to the hospital. We see 20 children during a session. While 10 are being scanned the other 10 are in lectures about health and their hearts. Then they swap over and when they go home they get a packed lunch.”

Cath, who is from Blackpool, added: “We feel we are making a difference. The children would not normally have access to this level of health care.

“Echocardiography is a cost effective way of scanning the heart.

“When we go to Africa we don’t just looking for rheumatic problems – we also look for congenital heart disease or abnormalities.

“The people are poor but they seem very happy. I like working with the kids.

“It’s also interesting to chat to volunteers from other hospitals across the world. We see very different pathology in Blackpool.

“This is my third year of going to Africa. I like to be helpful and to do something useful for the poorer communities out there.” 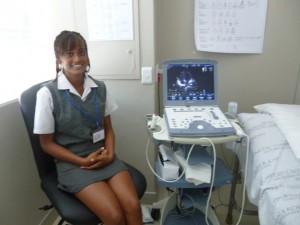 Young people are helped by the project

Donations can be made to the Echo in Africa project by looking on the website: www.echoinafrica.org/donations