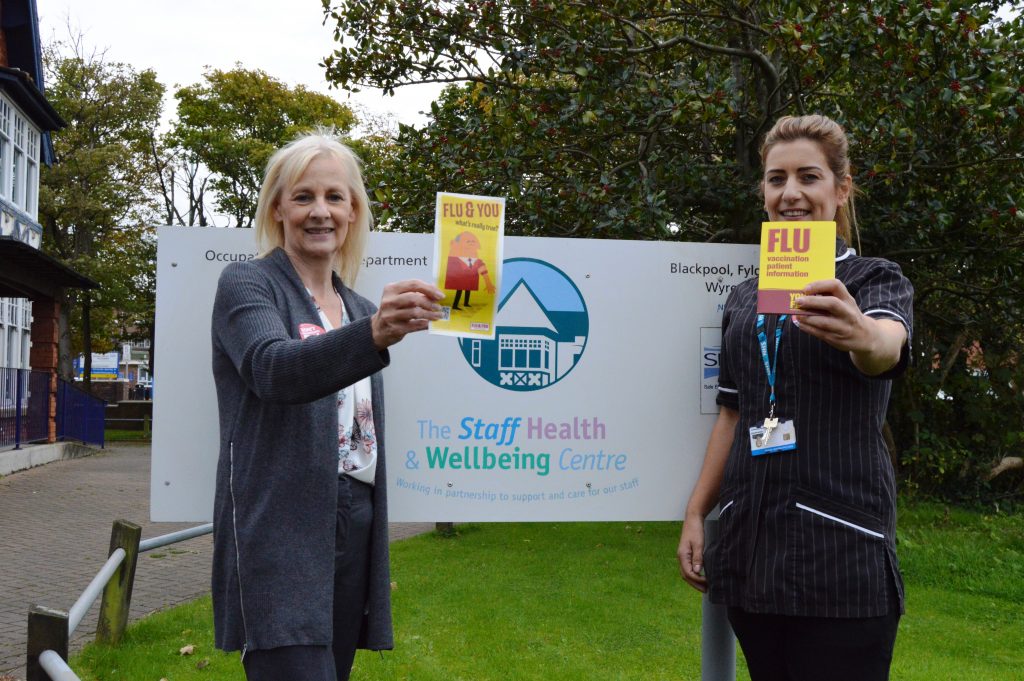 As part of our #MyBTH campaign, we are highlighting individuals, teams or services that have an important role within the Trust, but who are not often heard of or understood.

Staff may recognise Interim Head of Occupational Health, Sue Houldsworth and Occupational Health Sister, Kerrie Chesters especially at this time of year. They are joined by other members of the team as they aim to vaccinate at least 75% of the Trust’s frontline staff.

Now in the busiest time of the year, flu peer vaccinator training is well underway and the flu vaccinations are about to arrive after being ordered in January.

The amount of vaccinations ordered is an estimation taken from what is required to achieve our target of 75%, as used in the previous years’ campaigns and also from guidance from the World Health Organisation who monitor the flu virus throughout the world as the seasons change.

This year, the southern hemisphere has been hit hard by the flu virus. Luckily, the vaccination for the coming season combats the H3N2 strain which has been causing the problem.

The flu vaccination is required each year by individuals as the virus can mutate and would not be recognised by the antibodies made in response to the previous vaccines.

Sue said: “Flu does not discriminate. It will affect anybody no matter who they are or how healthy they are. ANYBODY can get flu.”

The flu is generally nasty but usually, people do recover in one to two weeks.

However, if people already have underlying medical conditions or are already vulnerable, then the flu can become life-threatening.

There is an incubation period of one to five days and it will take 14 days to become immune, hence why it is so important to get vaccinated early.

Sue said: “Generally flu is diagnosed clinically by the presenting symptoms which can include high fever, chills, headache, myalgia and fatigue.

“In some cases flu may be confirmed or excluded through a nasal swab.

“Some people also have cold-like symptoms too. Everyone can have slightly different symptoms.”

The NHS has a duty to protect itself, the health and wellbeing of its staff and its patients. Getting the vaccination remains the best way to help prevent staff becoming unwell with flu and also stop the spread of the infection throughout the hospital.

Kerrie said: “We have peer vaccinators across our hospitals and out in the community.

“Each hospital division will have their own vaccinators and schedules. We also have walk-in sessions and clinic sessions by appointment here at Occupation Health. We will also be available in some of the public areas.”

The annual flu awareness video will be out soon which will inform staff of where and when they can get their jabs before the deadline at the end of December.

Each division who has the highest percentage of vaccinated staff will win the coveted Flu Campaign Division Cup which will be awarded at a special event in January.

Any staff that would like peer vaccination training can call Occupational Health on: Ext 57950