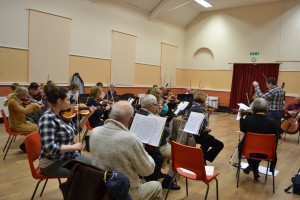 Fylde Sinfonia rehearsing for the concert

They’re used to performing to sell-out crowds in some of Blackpool’s top theatres, and now Fleetwood singers Ann Cookson and Peter Baldwin are looking forward to appearing in their first orchestra concert in aid of hospital charity Blue Skies Hospitals Fund.

Ann and Peter make up the singing duo Classic Sound, which is set to appear alongside the Fylde Sinfonia orchestra in their upcoming concert at the Lowther Pavilion next month.

Soprano Ann has been singing from an early age, and has risen through the ranks to embrace roles in musicals including The Boyfriend, The Pirates of Penzance and Chess – for which her audience included Sir Tim Rice.

Peter is a first class Tenor and has performed at Blackpool Opera House and at Edinburgh Festival, and recently appeared in Legally Blonde at the Grand Theatre in Blackpool and Sister Act.

Both have said they are very much looking forward to being part of the Fylde Sinfonia Concert, which is being held in aid of Blue Skies’ Peace of Mind dementia appeal on Sunday, 20th March. The concert will pay tribute to the orchestra’s former conductor John Simpson who died in 2009 after suffering dementia.

Speaking at the first rehearsal with the full orchestra at The Drive Methodist Church in St Annes, Peter said: “This is more speciality performing than we normally do and we’re really looking forward to singing this music with live musicians.

“There are only two pieces on the programme which we’ve never sung before and it’s really different for us not to be performing against a backing track – live orchestral music creates a really different sound.”

The programme includes well known favourites from Elgar, Beethoven and Mozart, as well as a Sound of Music medley and music from The Phantom of the Opera.

Ann added: “As well as the classical music, there are popular songs which the audience won’t be able to help but join in. The bill is full of songs many will recognise, played by the best local musicians.

“We are both so pleased to have been asked to accompany Fylde Sinfonia to help raise funds for this important charity appeal, and we hope as many people as possible join us for what will be a fantastic musical evening.”