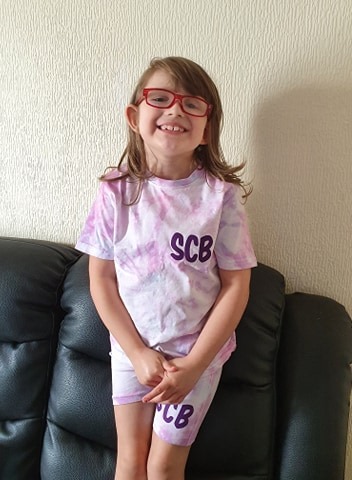 A generous seven-year-old cancer survivor raided her piggy bank to pay for a bell for children to ring at the end of their treatment at Blackpool Victoria Hospital.

Skye Brierley, who lives in South Shore, told her parents she would have liked to ring a bell after she recovered from the rare cancer rhabdomyosarcoma, but there wasn’t one.

And having discovered how much they cost, Skye emptied her piggy bank to pay for it.

Mum Ruth said: “She got to ring a bell at Manchester Royal but she said ‘I wish I could have rung the bell in Blackpool’, but there wasn’t one. They only had one in the adult oncology ward.

“So we said ‘why don’t we fund a bell in the children’s ward?’ She was really keen to do that, but it could only be for the children who had had a long-term illness!”

Ruth said she contacted the family who made the bells and discovered they cost £150 to make.

She said: “We told Skye and she tipped all the money out of her piggy bank. We asked if she was sure that’s what she wanted to spend her money on and she said ‘yes’!”

Isabel Spencer, Child Health Matron at Blackpool Teaching Hospitals NHS Foundation Trust, said: “We are really grateful to Skye for everything she has done for us.

“It’s a wonderful gesture that will really make a difference to the unit and really help bring a smile to everyone’s faces.’’

Skye was diagnosed with the disease when she was just four years old and has received treatment in Blackpool, Manchester and the United States.

While she has been free from complications for almost two years, she will never be given the ‘all clear’ due to the presence of scar tissue left over from her treatment.

Ruth added: “There will always be evidence of the cancer but Skye is so positive. She can get tired and her legs hurt, but she is such a kind girl and a real character.

“She either wants to be outside or watching Peppa Pig. She has hated being stuck inside so much this year because of lockdown, so for her to be able to help the hospital in this way made her really happy.

“We are now starting to wonder what we will do next year. We need to give something back. Those people on that ward looked after Skye so well whenever she needed to go into hospital.”

Nursing staff on the Children’s Ward