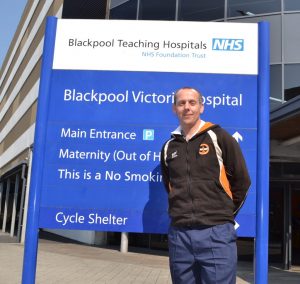 A BLACKPOOL healthcare worker with a desire to help people with mental health problems is raising funds for vital services who have helped many, including himself.

Ben Constable, 41, is a bench worker at Blackpool Victoria Hospital and is working shifts as a healthcare assistant with the hope to become a qualified nurse.

He has been motivated to raise money for charities close to his heart to improve mental health care and is running the Frankfurt Marathon later this year.

Ben explained: “I have worked in the Royal Air Force and developed PTSD from my experiences. I also went through a spell of losing people very close to me.

“I also lost one of my close friends who ended his life. He was ex- army and suffered from PTSD. Because of this, I am very determined to raise awareness of suicide and support people in talking.

“I suffered from depression and had counselling which the Royal British Legion set up for me. They supported me and guided me into sports training- I am now a qualified personal trainer and I have found this to be really positive for my mental health.

“Mental health charities have supported me so much and helped me with my career. I wanted to give something back to them and could think of no better way than fundraising.

“I am so grateful to the British Legion, the charity, MIND and the Royal Air Force Benevolent Fund. I have received so much support from them, including getting back into work.

“I have always been sporty and I am a very active person. Because of this, I thought it would be great to raise money through challenging myself physically.

“I have completed marathons in the past and also ultra-marathons! I really want to complete the Frankfurt marathon and also to at some time complete an Iron Man (A half Iron Man challenge is a 2.4 mile swim, 112 mile bike ride and a 26.2 mile run).

“I am confident in achieving this and I want to raise as much money as possible for the fantastic charities.

“Mental health awareness is massive! There was a huge stigma attached to talking about feelings, especially with men who can bottle up their emotions.

“I want to raise as much awareness as possible about suicide, especially for males.

“Challenging myself has also helped me and my mental health by having goals and using sport in a positive way to motivate me.”

To donate to Ben’s Go Fund Me page, use this link here: https://uk.virginmoneygiving.com/SomeoneSpecial/gcuclan