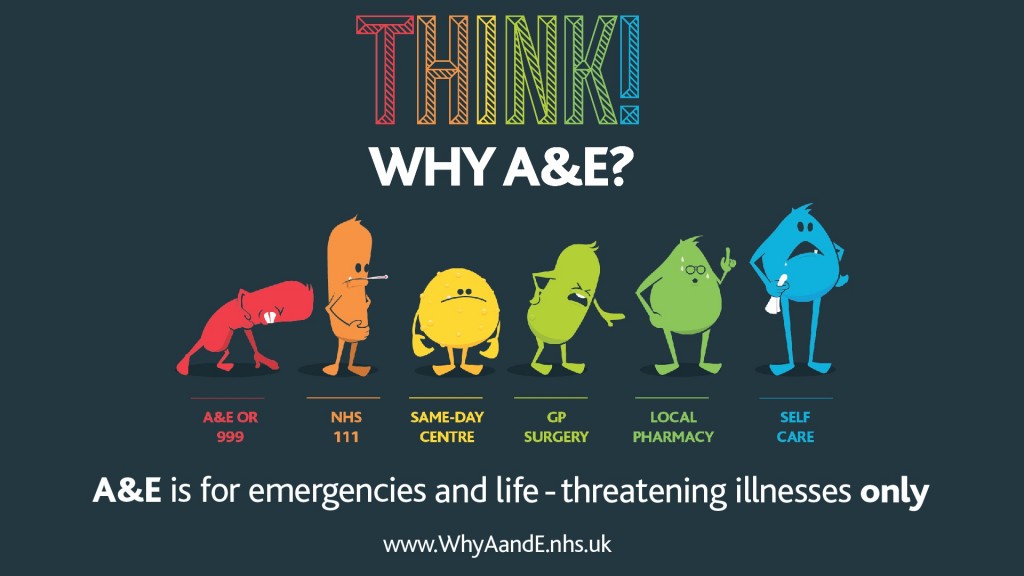 Fylde coast residents are being urged to think carefully before heading to A&E as a campaign launched to ease the pressure on hospital services celebrates its first birthday.

It is a year since health providers joined forces to launch the ‘Think! Why A&E?’ campaign.

Residents are once again being reminded of the importance of knowing the alternatives as Blackpool Victoria Hospital continues to deal with a high demand for services.

And to coincide with the anniversary, campaign organisers have launched pages on social networks Twitter and Facebook in a bid to communicate more widely across the Fylde coast.

The campaign uses six colourful characters to illustrate what people should do when they are feeling unwell or if they are injured.

The campaign video, which was viewed by thousands of visitors to this year’s Blackpool Illuminations and scooped the honour for ‘Most Original Concept’ at the recent Haelo Film Festival Awards, has been seen by almost 8,000 people on YouTube.

The ‘Think! Why A&E?’ campaign message is that people need to consider where to go or what to do when suffering from certain symptoms, rather than heading straight to A&E.

Self-care is the best option if a person is suffering from a hangover, a grazed knee, a cough, a sore throat or similar ailment.

Symptoms such as diarrhoea, a runny nose, painful cough and headache can be treated with the help of a pharmacist.

Residents are advised to make a GP appointment for symptoms including severe back pain, stomach ache, ear ache and vomiting.

Walk-in Centres are best for strains, cuts, sprains and itches.

If help is needed quickly and it is not clear what to do call NHS 111.

A visit to A&E is advised for symptoms such as chest pain, choking, blood loss and blacking out.

“These patients will usually be low priority and this means they could be waiting longer than most others in A&E.

“By choosing and using the right health services, patients can expect to be seen or treated more quickly, while keeping emergency services free for those patients with serious and life-threatening illnesses.

“We need to keep A&E departments for those people who are extremely unwell and need urgent medical attention.”

Clinical Chief Officer for Fylde and Wyre CCG, Dr Tony Naughton, said: “Many people head to A&E when they are suffering from symptoms that would be best treated elsewhere.

“All they do is increase the amount of time they have to wait for treatment and add to the financial and time pressures already being experienced at the hospital.

“This campaign has already had a great impact and our feedback so far has been very positive, with more than 95 per cent of people who have seen the campaign saying they would now consider their options.

“Now we need to make sure it is seen by as many people as possible across the Fylde coast and ensure more and more people are indeed thinking ‘why A&E?’.”

Dr Amanda Doyle, a Blackpool GP and Chief Clinical Officer at NHS Blackpool CCG, said: “The message behind our campaign is clear; A&E is for emergencies and life threatening illnesses only.

“We aren’t asking people to avoid A&E when it is necessary but to think carefully about when it is and isn’t appropriate. There are often more appropriate alternatives which can help people get the right treatment more easily and quicker.

“With support from the public we can make sure that those who do need emergency and urgent care get it.”