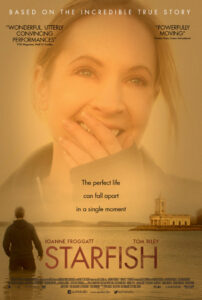 MEMBERS of the public are invited to a free screening of a popular British film based on the life of a sepsis survivor.

“Starfish” tells the story of Tom Ray, a young father whose life was changed drastically after developing sepsis and stars Tom Riley as Tom and Joanne Froggatt as his wife Nicola in a tale of a couple whose perfect life falls apart in a single moment.

The critically acclaimed film is being shown at Blackpool’s Regent Cinema on Wednesday, September 11th at 6pm as part of a Fylde coast NHS campaign called Sepsis September raising awareness of the recognition and management of sepsis across the area.

“Starfish” tells the story of a couple whose love is tested to its limit after Tom developed sepsis.

While her husband was in coma, Nicola gave birth to their second child on the other side of the same hospital. Within a matter of days, sepsis would rob Tom of both his arms and legs, and left his face severely disfigured.

This incredible story of survival shows what can be overcome when love is unconditional.

Tom and Nicola will be present at the film and will be sharing their story of resilience and survival in a special question and answer session after the film.

Professor Morris Gordon, Quality Strategy Lead, from Blackpool Teaching Hospitals NHS Foundation Trust, said: “The idea of this event is to put a different light on the topic of sepsis.

“Members of staff within the NHS  were deeply moved by Tom and Nicola’s story when they visited the trust last October. Their experiences allowed us as healthcare professionals to not just consider the pathways and targets as ways of improving care, but to understand what sepsis means to individuals.’’

Prof Gordon added: “Our continuing work in enhancing care for sepsis is not just occurring with our hospital trust, but in partnership with the wider health and social care footprint over the whole region.

“Sharing knowledge and understanding of Tom and Nicola’s story can help empower patients and the public regarding sepsis and we are very grateful to have this opportunity to share their experiences to such a wider audience.”

Tickets can be booked online at: http://www.regentcinemablackpool.co.uk/