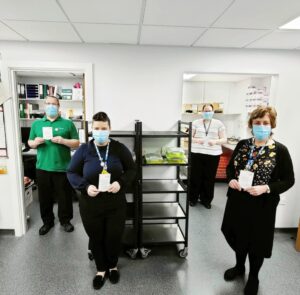 Members of the Trust’s Pharmacy Vaccination Team have received a Going The Extra Mile award for their commitment to the mass vaccination programmes.

The team consists of senior managers Rebecca Bond and Angela Nelson; Darren McCormack, Anne Magee and Lara Sowcroft of the Aseptics Unit; and Louise Sadler and Angela Nausino from the purchasing team.

Colleagues have praised the seven-strong team for their work in everything from operational aspects to ensuring the vaccine was diluted safely and running a strong supply chain.

Rebecca Bond and Angela Nelson were nominated for the award by Janet Barnsley, the Trust’s Executive Director of Operations, and the rest of the team by Rebecca.

Rebecca said: “It was lovely to receive the award and we felt like our efforts were really appreciated at a Trust level. I nominated the other five staff as their commitment to the programme and efforts were second to none. It simply wouldn’t have been such a success without everyone being involved.” 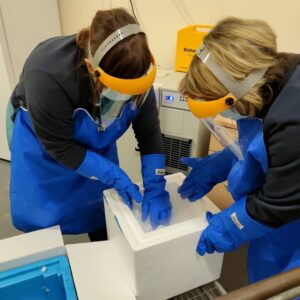 Louise Sadler and Angela Nausino of the Pharmacy Vaccination Team

Rebecca and Angela Nelson led the team’s operational aspects, while Darren, Anne and Lara ensured that the vaccine was diluted safely with good aseptic technique. They also provided training to other vaccinators and wider training for the Mass Vaccination Centre at the Winter Gardens in Blackpool.

Louise and Angela Nausino ensured a strong vaccine supply chain, and supplied Occupational Health with the vaccines they needed on a day-to-day basis. Dealing with an ultra-low temperature freezer (as low as -70°C) the team required special training and PPE.

In her nominations Rebecca praised the team for developing new ways of working and fresh ideas. 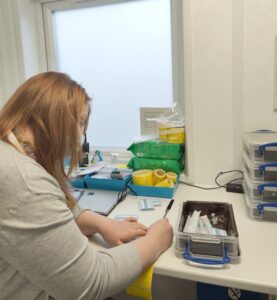