A new group has met for the first time to bring together patients who have an implanted defibrillator.

Defibrillators are implanted under the skin and are used to “shock” the heart back in to a normal rhythm if a life threatening rhythm occurs. Patients who have suffered from or are at risk of developing these rhythms can have an Implantable cardioverter defibrillator inserted.

For some patients, having a device can be a life changing event. Some people cope with them very well, whereas some struggle with physical, emotional and psychological issues. To help those who need support with their device and the changes in lifestyle that is required, Blackpool Teaching Hospitals NHS Foundation Trusts Arrhythmia service set up a group and invited people to attend.

Samantha Kilmurray, Cardiac Advanced Practitioner at the Trust, who set up the group along with other members of the cardiac team, said: “There are over 1000 people in the north west region with these devices. We identified people living in Blackpool and Preston to attend the first group and just over 50 of them came along.

“We aim to hold two or three meetings a year to bring people together so they can see that they are not alone and to learn from others in similar positions. The group was brilliant, with everyone attending commenting on how useful it was.” 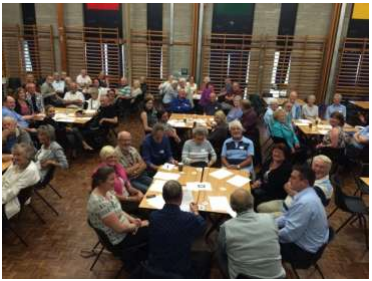 The first meeting was held at Millfield Science and Performing Arts College and the group heard talks from three speakers, including a patient who had a defibrillator device for twelve years and the companies that make the devices. A range of healthcare professionals were also available to talk to on the night, including staff from heart failure, cardiac investigations, pacing team, physio’s /OT, cardiac rehabilitation staff, arrhythmia nurses and nurses from the wards.

Samantha added: “We have had suggestions for the type of speakers the group would like to hear from, including an overwhelming desire to hear from each other. It seems they really want to know how others are coping so they can be inspired and adjust themselves. It’s just what we wanted for the group.”

“We are very thankful to Millfield Science and Performing Arts College for letting us use their space. It’s been a great success and we are planning the next meeting for a few months’ time. We are also going to try and hold groups in other areas too.”