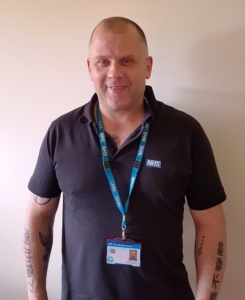 Patients referred to new community based, neighbourhood care teams operating across Blackpool are benefiting from the input of a new and unique staff role.

Now, thanks to a new Health and Wellbeing Support Worker role created within these neighbourhood teams, patients across Blackpool are benefiting from increased social and wellbeing support alongside care for their health needs.

The teams which see integrated multidisciplinary teams working together within each local neighbourhood to support complex patients, work together to deliver a new model of support for patients called Enhanced Primary Care.

At the heart of this is centred on the better coordination of care and reducing demand on other services.

Alongside, other members of the teams which include Physios, Occupational Therapists, Clinical Care Coordinators, Neighbourhood Assistants and existing community nursing services amongst others, Health and Wellbeing Support Workers, help to ensure that all of a patients needs are met.

David Bentley, is one of the new Health and Wellbeing Support Workers employed by Blackpool Teaching Hospitals NHS Foundation Trust and currently works within the North  Blackpool neighbourhood team.

He started out as a Healthcare Assistant in the gastroenterology department at Blackpool Victoria Hospital, before moving to the Cardiac Investigations Unit as an assistant cardiac physiologist. David then joined the Extensive Care Service before later joining the North Blackpool neighbourhood team service to explore the newly created role – taking with him the learning and experiences gained.

As a Health and Wellbeing Support Worker, David sees between six and 10 people on any given day depending on their need, often spending an hour or so with each patient. All of this patient contact is spent seeing people in their own homes.

At present, David has around 30 people on his current caseload but is discharging people just as quick as new referrals to the team arrive. 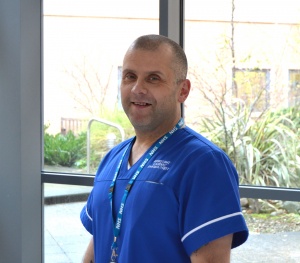 David in his clinical gear

The type of patients who David supports varies from people who are overweight or suffering severe depression to those with more complex or serious conditions such as cancer. The purpose remains the same though; to help the patient to take control of their condition and their lifestyle to make positive improvements whilst reducing multi professional input.

David said: “I get involved in some of the clinical aspect due to my background so if a wound needs redressing I will often do it while I am with the patient. The majority of the time though I act as a motivator and link to other services. My job is to get to know the patient and work out what they need in order to improve their situation.

“It’s all about building a rapport so they trust me enough to let me get to the finer detail. That takes time but is worth the effort. I make a point of seeing my patients that need it on a weekly basis if I can so they get used to me and can strike up a relationship. Even if it’s just to pop in and see what they have been up to and check if they need anything.

In his spare time, Davis is training to tackle Everest base camp in November – a challenge which many would deem unattainable. However, David exudes confidence and boasts “I don’t do negativity”. It’s an ethos he carries throughout his work. He is clearly passionate about what he does saying his motivation is to ‘simply help people’.

“It’s surprising sometimes how a simple conversation can trigger an idea that can lead to a big difference” said David.

“You have to think on your feet to create ad hoc treatments which can be supporting somebody with a healthy diet or just dealing with things that are worrying patients.”

“I work closely with other teams so if needed, I’m able to refer to mental health teams, counsellors and other services to deal with some of the underlying causes patients have such as anxiety and depression, alcohol or substance misuse.”

For David though, getting the balance right and maintaining the positive approach has seen some heart-warming results. He tells of one patient that has completely turned his life around. He had become reclusive and shied away from any personal contact. His confidence was incredibly low and he had grown to be morbidly obese.  Spending his days watching TV or playing online games had put a strain on his relationship and that had made him depressed. He was seeing health professionals because of breathing conditions caused by his inactivity.

“My first issue was working on his confidence and anxiety and setting goals every week; the first was to turn off the TV and laptop during the day and help him to start developing his relationship with his partner and talking more. He was willing to give it a go and in time he was going for short walks with his partner. That was getting him out of the house and more confident. 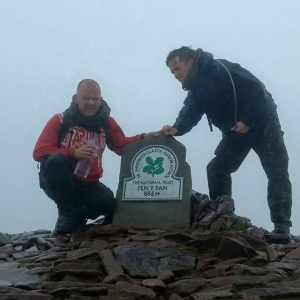 David on a climbing and walking expedition

“The next plan was to lose weight. On first weighing him he weighed almost 22 stone so together we set a goal for him to lose 45-50lbs over the next few months to a date in September for his partner’s granddaughter’s wedding. He’d initially been set on not going to this because of his weight and confidence issues.

“He’s now well on his way to hitting his target and if anything he now eats healthier than I do. He emails me every week with details of what exercise he’s been doing and what he’s been eating.

“His confidence has seen a dramatic change; he goes out with his partner and has even been away for a weekend on his own. He has really taken back control of his life and is so motivated to improve even further.

“The knock-on effect is that his leg pains are easing and his physio team are seeing an improvement too. I haven’t really done anything beyond motivating him and acting as a catalyst for his change.

“That kind of turnaround is what makes the job worthwhile.”