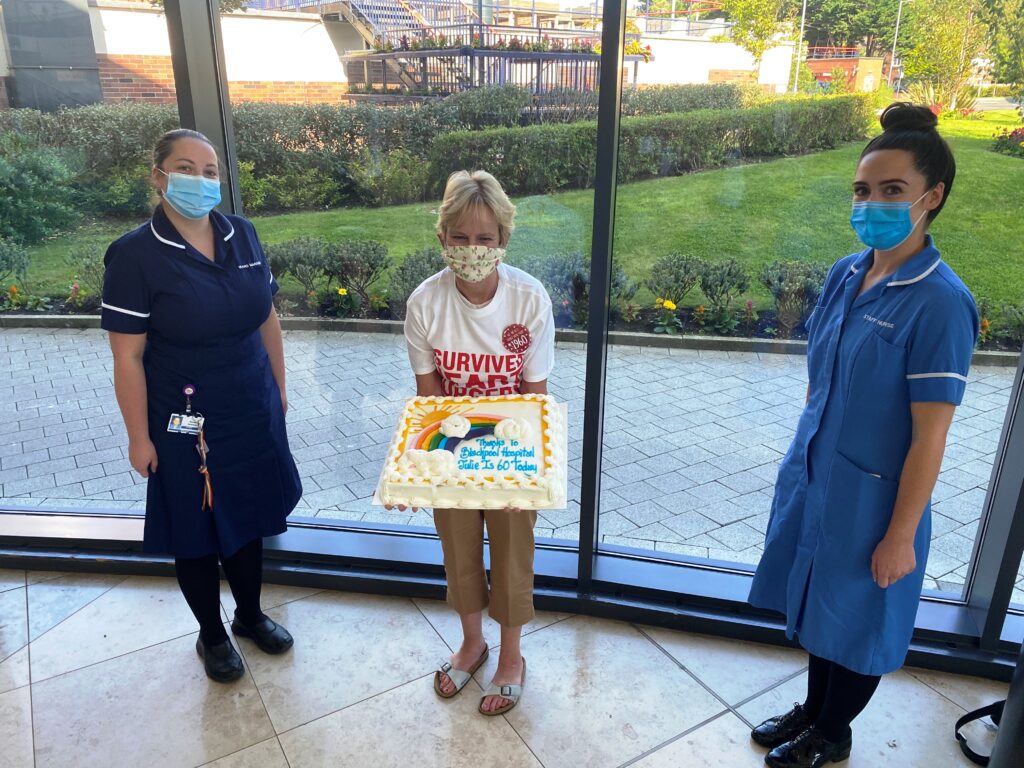 A holiday maker has returned to thank staff at Blackpool Victoria Hospital following a promise she made after a life-threatening incident on her 59th birthday.

Last year, Julie Pigott, from St Helens, suffered an unsuspecting heart attack while on holiday in Blackpool. She told cardiac staff that she would return on her 60th birthday with cake for them all …and kept to her word.

Julie, a retired post mistress, said: “In 2019, I came for a short break with my daughter Louise and her two children Harrison and Elliot. 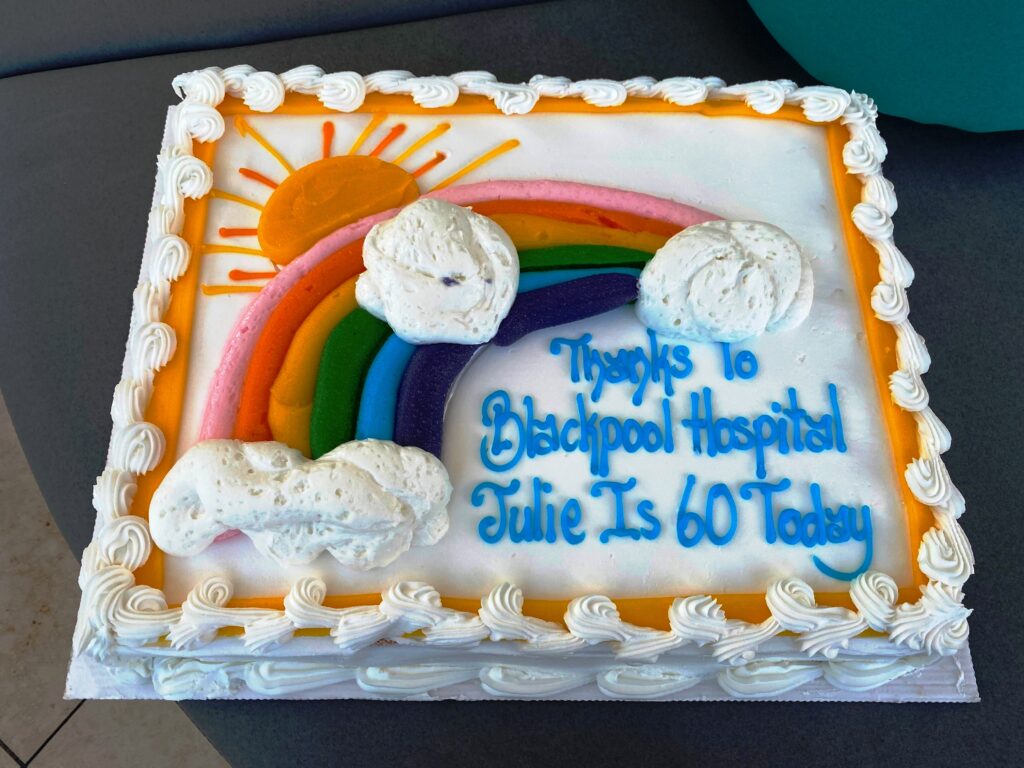 “I hadn’t been feeling great and thought I had a cold in my back, but I went on the trip anyway.

“I had some pains in my arms and couldn’t seem to get my breath, so I took a taxi to the Walk-In Centre at Whitegate Drive, just to get checked out.”

It was there that medics asked Julie if she had a history of heart problems in the family. When Julie said yes, they performed an ECG and revealed Julie had suffered a heart attack the previous week. By trying to soldier on, she may have inadvertently caused more damage. They called an ambulance to take her to Blackpool Victoria Hospital.

Julie said: “Louise had her hands full with her children in Blackpool Tower and had poor phone signal. My husband Terry wasn’t answering his phone as he was at church and my son lives in Romford, so I was on my own and very anxious. But the paramedics and hospital staff were great.” 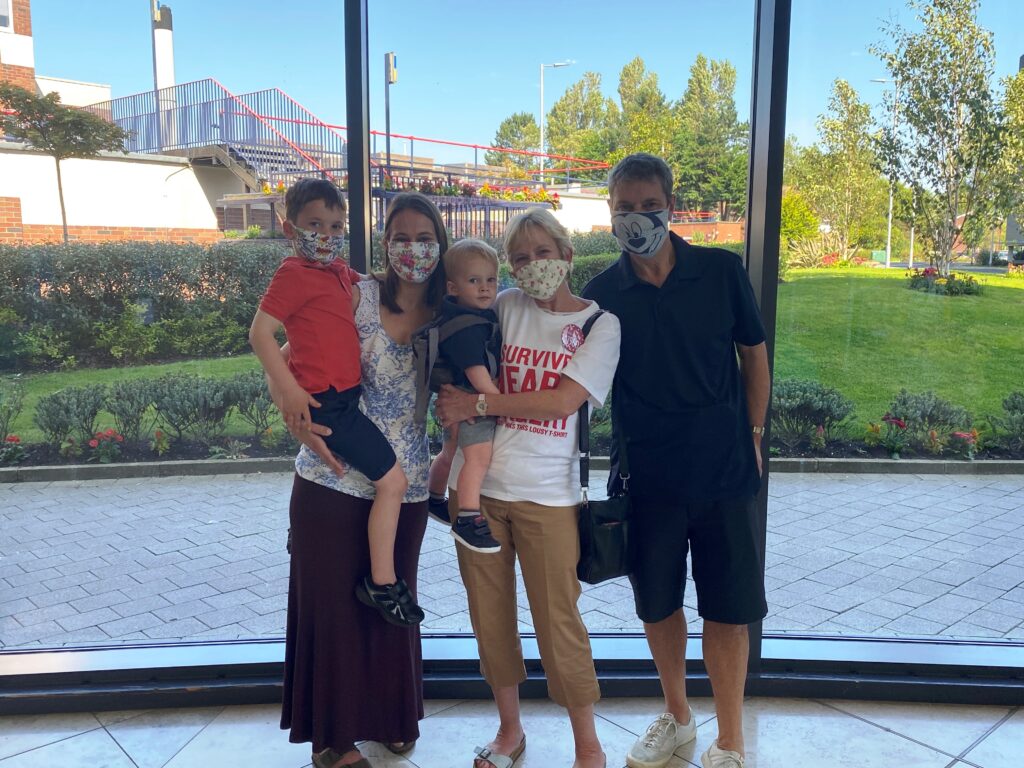 When Julie arrived at the Lancashire Cardiac Centre, based at Blackpool Victoria Hospital, surgeons discovered that Julie had been suffering from heart failure for quite a while, despite having no symptoms. They arranged to perform a heart bypass.

During her two-week hospital stay, Julie celebrated her birthday. The staff sang ‘Happy Birthday’ to her and tried to mark the day. It was then that Julie promised to return on her 60th birthday with a thank you cake.

Janet Edwards, Ward Manager of Cardiac Ward 39, said: “It was lovely to see Julie looking much better and enjoying another holiday here in Blackpool. The cake was delicious and all of the staff involved in Julie’s care had a piece to celebrate her 60th. What a kind thing to do! Thank you so much Julie!” 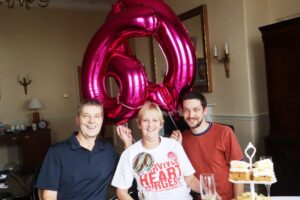 Julie added: “All the staff that cared for me were lovely and I got to know quite a few of them during my 14 day stay here.

“Coming to Blackpool saved my life. Since my heart attack, I live for the day as tomorrow might never come. My husband Terry and I are spending our money doing things we enjoy. We are hoping to go on a cruise when it’s possible to celebrate our 35th wedding anniversary this year.

“I’d like to urge women not to try to struggle through and get any pains checked out. Symptoms of a heart attack often present differently in women – with pains in the back or neck, not in the chest like you might expect.”